Loading...
The Magnificent Emperor
READ THIS BEFORE EDITING THIS PAGE 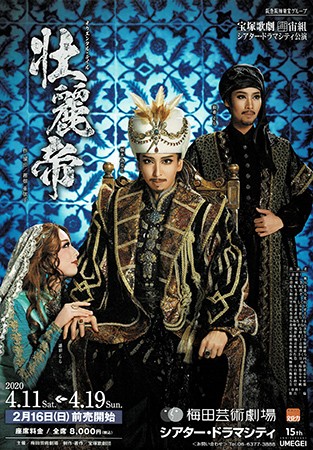 Based On: the life of Suleiman I, 10th Sultan of the Ottoman Empire
Author / Director: Kashihata Aiko
Composer: Teshima Kyouko
Choreographer:

This is a historical romance set in the golden age of the Ottoman Empire, about the life of Emperor Suleiman (called The Magnificent), his love for his chief consort Hurrem, and the ties that bound him to Grand Vizier Ibrahim (who was like a brother to him).

The Ottoman Empire in the beginning of the 16th century. Suleiman, son of Selim I, the 9th emperor, sneaks out into the town with his trusted friend Ibrahim, where he meets a girl. Stolen from her hometown in a far away land and sold as a slave, her name is Alexandra.

With the death of the emperor, Suleiman becomes the 10th emperor of the Ottoman Empire. Alexandra has entered the emperor's harem, and Suleiman is charmed not only by her beauty, but also by her abundant wisdom, and he grants her the new name of Hurrem ("the cheerful one"). Several years after ascending the throne, he has conquered enemy lands that stymied his ancestors, and as emperor brought great achievements. Hurrem, who runs counter to so many of the customs of the harem, is Suleiman's favorite, and Suleiman has appointed Ibrahim to a post above his origins as a slave.

There are many things in the palace, many disturbances to cause conflicts, and a crack even begins to grow between Suleiman and Ibrahim....