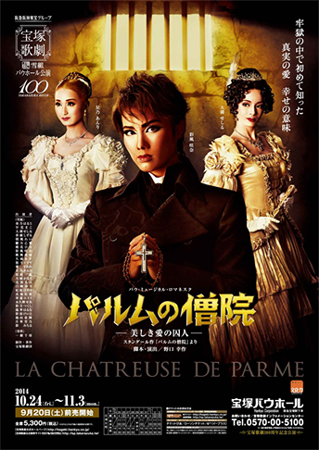 Early 19th century Italy. Fabrice's aunt Gina meets and befriends the Prime Minister of Parma, Count Mosca. Count Mosca proposes that Gina marry a wealthy old man, who will be out of the country for many years as an ambassador, so that she and Count Mosca can be lovers while living under the social rules of the time. Gina's responds, "But you realize that what you are suggesting is utterly immoral?" Nevertheless, she agrees, and so a few months later, Gina is the new social eminence in Parma's rather small aristocratic elite.

Gina has had very warm feelings for her nephew ever since he returned from France, and she and Count Mosca try to plan out a successful life for the young man. Count Mosca's plan has Fabrice go to seminary school in Naples, with the idea that when he graduates he will come to Parma and become a senior figure in the religious hierarchy, and eventually the Archbishop, as the current office holder is old. The fact that Fabrice has no interest in religion (or celibacy) matters not to this plan. Fabrice agrees and leaves for Naples.

After several years in Naples, during which he has many affairs with local women, Fabrice returns to Parma and shortly thereafter gets involved with a young actress whose manager/lover takes offense and tries to kill Fabrice. In the resulting fight, Fabrice kills the man and then flees Parma, fearing correctly that he will not be treated justly by the courts. However, his efforts to avoid capture are unsuccessful, and he is brought back to Parma and imprisoned in the Farnese Tower, the tallest tower in the city. Gina is very distressed by her feeling that Fabrice will certainly be executed, so goes to the Prince to plead the Fabrice's life.The Prince is alienated by Gina's dignity and refusal to yield, but seems to agree to free Fabrice, signing a note written by Mosca. But the Count, in an effort to be diplomatic, has omitted the possibly crucial phrase unjust procedure. The following morning, the Prince arranges for Fabrice to be condemned to a very long prison term.

For the next nine months Gina schemes to have Fabrice freed and manages to get secret messages relayed to him in the tower, in part by means of an improvised semaphore line. The Prince keeps hinting that Fabrice is going to be executed (or poisoned) as a way to put pressure on Gina. Meanwhile, Fabrice is oblivious to his danger and is living happily because he has fallen in love with the commandant's daughter, Clélia Conti, who he can see from his prison window as she tends her caged birds. They fall in love, and after some time he persuades her to communicate with him by means of letters of the alphabet printed on sheets ripped from a book.

Gina finally helps Fabrice escape from the Tower by having Clélia smuggle three long ropes to him. The only thing that concerns Fabrice is whether he will be able to meet Clélia after he escapes. But Clélia – who has feelings of guilt because the plot involved giving laudanum to her father, which she perceived as poison – promises the Virgin that she shall never see Fabrice again and will do anything her father says.

Gina leaves Parma and puts in motion a plan to have the Prince of Parma assassinated. Count Mosca stays in Parma, and when the Prince does die (it is strongly implied that he was poisoned by Gina's poet/bandit/assassin Ferrante) he puts down an attempted revolt by some local revolutionaries and installs the son of the Prince on the throne. Fabrice voluntarily returns to the Farnese Tower to see Clélia and is almost poisoned there. To save him, Gina promises to give herself to the new Prince. She keeps her promise and leaves Parma immediately afterwards. Gina never returns to Parma, but she marries Count Mosca. Clélia, to help her father, who was disgraced by Fabrice's escape, marries the wealthy man her father has chosen for her, and so she and Fabrice live unhappily.

Once he is acquitted of murder, Fabrice assumes his duties as a powerful preacher of the Catholic Church, and his sermons become the talk of the town. The only reason he gives these sermons, Fabrice says, is in the hope that Clélia will come to one, allowing him to see her and speak to her. After 14 months of suffering for both, she agrees to meet with him every night, on the condition that it is in darkness, lest she break her vow to the Madonna to never see him again and they both be punished for her sin. A year later she bears Fabrice's child. When the boy is two years old, Fabrice insists that he should take care of him in the future, because he is feeling lonely and worries that his own child will not love him. The plan he and Clélia devise is to fake the child's illness and death and then establish him secretly in a large house nearby, where Fabrice and Clélia can come to see him each day. After several months the child actually does die, and Clélia dies a few months after that. After her death, Fabrice retires to the titular Charterhouse of Parma (a Carthusian monastery), where he spends less than a year before he also dies. Gina, the Countess Mosca, who had always loved Fabrice, dies a short time after that.