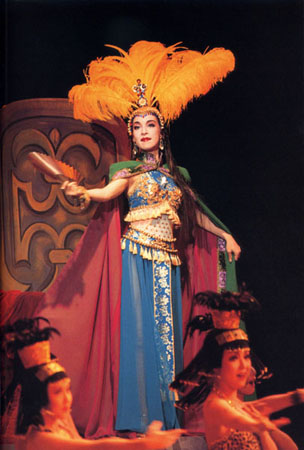 Part I: "The Diary Of Adam And Eve"

Adam is asleep in a gardenif you can call it thata small patch of flowers and an apple tree over the hill in the distance. A voice awakens him and instructs him to start assigning names to the creatures of Eden but warns him to steer clear of that apple tree. Reluctantly he begins the task. Suddenly he feels a pain in his rib. Ouch! He looks down curiously at Eve but decides to "name it later." He exits.

Eve looks around and likes what she sees singing "Here In Eden." She takes delight in being here but admits she has "one tiny reservation/There's nothing handy for making conversation."

Adam reappears with a fish he just caught. She threatens him with a rock if he doesn't release the poor little thing. She wins that round.

Second day. Referring to Eve as "that new long-haired creature," Adam is bewildered by her and tries to keep his distance. But she's quite remarkable. She's able to name the species of things ("parrot" or "pickerel") whereas Adam can only identify them as "flyer" or "swimmer." They argue a bit and he excuses himself explaining he has "to go empty the four-pronged white-squirter." She asks him "You mean the cow?"

Adam announces the sixth day and complains that Eve seems to name everything and that he never gets a chance. It looks like rain. He starts to build a shelter. Eve comes along with an apple in her hand. Adam is shocked and warns her about the apple tree over the hill where the fruit is forbidden. She's curious and wants to try it, but he warns her to stay away from it.

He's completed the shelter just as it begins to rain. She wants to enter the hut but he claims there's no room. She begins to cry, so he allows her to come into the shelter if she will stop "raining."

Sunday. Adam complains about her in his song, "Eve," but admits she's certainly interesting. On the other hand she can pester him tooto do this and do thatbut now he's relieved since she's spending more time down at the pond with the Snake, giving Adam time to rest quietly.

Looking into the pond, Eve sings "Friends" to her reflection thinking the girl she's addressing is really another person.

The Snake, dressed in a tuxedo, enters and, in highly scientific terms, explains her reflection in the pond. She's disillusioned for she thought she had a friend in the reflection, but on the other hand she's very impressed with his intelligence and wishes she could be educated like him. The Snake sings "The Apple Tree" and temps Eve to savor the irresistible "forbidden fruit," promising information she'll need for her education and that she'll be an inspiration to Adam.

The scene changes as Adam is horrified to see a lion suddenly attack a lamb. This had never happened before. Something's up. Thunder roars. He realizes it's Eve's fault. He confronts her. "I warned you. You ate the apples, didn't you?" But she tries to shift the blame to him. They both admit a sense of guilt and she assures him, since he's hungry, there's no harm in taking a bite of her apple. He does. They feel shame and cover themselves. They realize they better leave and build a new shelter elsewhere.

The scene changes; time has passed. Adam is seated on a porch with a corncob pipe in his hand. He admits he needs Eve as his companion. He's been working on the multiplication table, and she asks how it's coming along. He puts his arms around her and asks if she's putting on a little weight as the lights fade.

"It's A Fish" sings the new father not recognizing what the peculiar, new member of the household is. Eve, carrying the "fish" wrapped in a blanket, sings it a lullaby, "Go To Sleep Whatever You Are." Adam, still puzzled about what "it" is, announces "I'll be damned if she didn't catch another."

In the next scene Eve recognizes that they're boys and that it was their "immature shape that puzzled us." She calls offstage to the boys, Cain and Abel.

Years pass. Eve reflects that "Cain struck Abel and ran away" and realizes how much she depends on Adam and sings "What Makes Me Need Him?"

The final scene of the act: Adam is alone. "Eve died today." It didn't matter that they had to leave the Garden "Because, wheresoever she was, there was Eden." He tends to her flowerbed. Curtain.

The Balladeer with guitar enters singing "I'll Tell You A Truth" to introduce a tale of star-crossed lovers.

King Arik and his daughter, the Princess Barbara (pronounced "bar-BEAR-a") make a royal entrance as the chorus sings "Make Way." The Balladeer supplies some background on the King who invented a curious game in which a prisoner in the arena has to choose between two doors: behind one is a ferocious tiger. It can be a bloody game of chance. A demonstration is in progress. The crowd reacts as the prisoner hesitantly approaches one door and then the other. Finally he chooses the wrong one (needless to say) and a tiger leaps out and devours him.

The Balladeer comments "However, suppose he had chosen the other door" and we get a replay of the scene as a beautiful lady steps through the door.

Meanwhile, back at the palace we are introduced to the brave Captain Sanjar. The exhausted warrior enters, announces a victory and collapses on the spot.

Left alone Barbara kisses Sanjar awake and embraces her. They sing "Forbidden Love." Occasionally they are interrupted by Guards and/or Handmaidens, but when left alone resume their declarations of love for each other. They plan to run away together and sing "Gaul" but they know it will never work.

King Arik confronts them. Princess Barbara can never love a common man according to the sacred commandment. Sanjar is taken prisoner. The Princess must find a way to save her lover. But how? Ah, ha, of course, she'll go to the Royal Tiger Keeper who bears a remarkable resemblance to the Balladeer we met earlier (who bears a remarkable resemblance to the Snake we met even earlier). Barbara offers him her jewels in exchange for a tiny bit of information... behind which door is the tiger kept? They sing "I've Got What You Want" (in a style not unlike a bump and grind number in a burlesque house) in which he advises her that it would be better for her not to know which door Sanjar should choose. But she insists and he whispers the secret in her royal ear.

Nadjira, Barbara's servant girl, who also has her cap set on Sanjar, is brought in. Lo and behold, she's to be the prize behind the second door. Barbara protests to no avail.

The Balladeer comes in pushing the tiger cage in place. Barbara sings "Tiger, Tiger," her torch-ure song, determined that if she can't have Sanjar, Nadjira never will. You mean the tiger gets him? But either way, Barbara is going to lose her man.

Again, the arena as the crowd sings "Make Way." Facing the two doors, a terrified Sanjar looks to Barbara for a signal as to which to choose as he sings "Which Door?" The spotlight shifts to Barbara in her hopeless distress: send him to the tiger or into the arms of Nadjira? "This choice is tearing me apart." Finally, she points her royal finger at one door. Sanjar approaches the door hesitantly. The decisive moment!

The action freezes and the devilish Balladeer has the last lyric. Curtain.

Ella is sweeping the chimney on a rooftop overlooking Manhattan. The Narrator explains this is not her chosen career. "Oh, no" chimes in the chimney sweep and tells us what she really wants: "Oh, To Be A Movie Star" she sings. She admits she'd do anything to become a movie star; she'd even "sweep out the theatre/And fold up the chairs."

Despite her devotion to her job, automation is taking over the chimney sweep's craft. She's fired. Her piggy bank is empty. She's desperate. Even her television set (where, at least, she could watch movie stars on the Late- Late Show) has gone dark. Then a spark. A glow. A flash! Suddenly a blackout. The voice of the Narrator announces an answer to her most cherished dream. More flashes.

And she appears transformed into the blond and beautiful Passionella singing "Gorgeous." The Narrator warns her she can be the glamorous superstar only from the time of the nightly news to the end of the Late-Late Show. Passionella asks "And the rest of the time?" To which the Narrator replies that she'll be her "usual sooty self." She realizes she must make the best of every moment, so she rushes off to a posh night spot where everyone wonders "Who Is She?"

The Narrator explains how this ravishing beauty keeps mysterious hours working only between the evening news and the end of the Late-Late Show. She is more and more in demand, more pictures, more parties, more premieres. Bursting through a huge photo of herself she sings "I Know" to her worshipping fans. Men beg for her. Women envy and emulate her.

The Narrator asks "But--was Passionella happy?" Ay, there's the rub. Passionella answers with her number, "Wealth," itemizing all the benefits of being famous, glamorous, and successful but concludes that she is not truly content since she has no one to share her attributes with.

Then the Narrator describes how she met the right man in a Hollywood drug store. He's a combination of Bogart, Brando, Presley... with "the hair style of Eleanor Roosevelt." His name: Flip (aka Prince Charming).

Flip is very cool. Very hip. With it. He confronts Passionella with his country-western style song "You Are Not Real" in which he decries that all she's got is "a Cinerama body/And a celluloid heart." With microphone in hand, twirling the cables, he declares that what he's looking for, what will get his "heart to throb," is a girl who's "a slob."

Passionella goes to her producer to complain about playing paper-thin glamorous roles. She wants to play something real... like a chimney sweep! The studio agrees. She's a sensation. It's great art! It's real! A huge Oscar rolls on. She wins for "The Chimney Sweep." Cheers! A glamorous Passionella sweeps down the theatre aisle. Flip greets her, presents the statuette, and asks her to marry him.

The Narrator describes how the two lovers went home and made "love in front of the television set."

A film on a huge screen is showing the ending of Camille. The Late-Late Show ends and the network is signing off. She's forgotten about the "network sign-off" deadline. The lights blackout and then come up on Ella as we first saw her as the chimney sweep. Apparently, Flip is under the same spell as Ella. We see him as a mousy, shy fellow plopped in front of a TV set. They spot each other and giggle and embrace. And the Narrator assures us "they lived happily ever after."

Prior to this production, The Apple Tree had been performed twice before in Takarazuka, once by Flower Troupe and once by Snow Troupe.