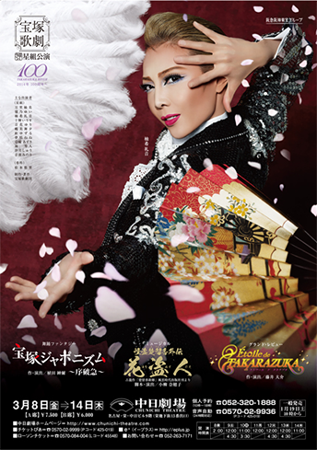 The Bandit Chu Liuxiang Side Story:

A Japanese dance revue show modeled on the artistic modulations in traditional Japanese performances ("johakyuu"). The opening theme is the spirit of "wa" ("peace"), the middle is the spirit of "inori" ("prayer"), and the climax is "kin" ("dignity").

Musical
The Bandit Chu Liuxiang Side Story ~The Flower Thief~

Chu Liuxiang robs from the rich to help the poor and upholds justice in the jianghu (martial artists' community). He is nicknamed "Daoshuai" (盜帥; Bandit Chief) or more popularly, "Xiangshuai" (香帥; Chief Xiang). He is intelligent and observant, kind and compassionate. His name "Liuxiang" literally means "lingering fragrance".

Chu is a martial arts expert whose prowess in qinggong is unmatched. He wields a fan as his weapon and uses it only for self defense. He relies on his wit, experience and calm to solve several mysteries and overcome several enemies who are more powerful than him.

Chu resides on a boathouse called Xiang Boathouse, which also functions as his headquarters. Living together with him are three women, who are the closest people to him apart from his best friends Hu Tiehua and Ji Bingyan. They come from pitiful backgrounds and have been following Chu on his adventures since they were 11 or 12. The first, Su Rongrong , is kind and understanding and specializes in the art of disguise. The second, Li Hongxiu, is very clear and alert and has a good memory. The third one, Song Tian'er, is a good cook and is the most mischievous and adorable of the three.