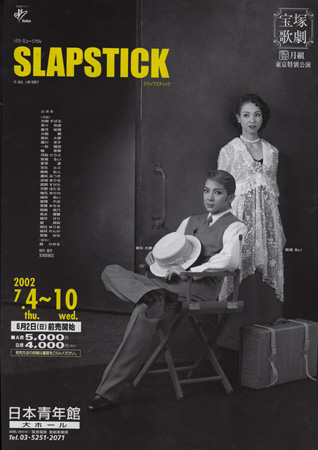 In the opening scene, an old man is watching late night TV, when suddenly the show changes to one of those "Whose Life Was This?" type shows. The hosts suddenly mysteriously appear in the old man's room, telling us this show will be about Mack Sennet, once known as the King of Comedy.

Mack Sennet (born Michael Sinnott in Richmond, Quebec) moves with his family to Connecticut at the age of seventeen. There he quickly becomes disenchanted with his father's work as a blacksmith and leaves for New York City, intending to join the Metropolitan Opera. He has a letter of introduction from his mother to one of the people there. However, when he arrives, his only talent is singing, which he is told isn't enough for the opera. He is given another letter of introduction, this time to the vaudeville circuit. It is there that he meets Rudolph (Rudy) Arbus, an aspiring actor. The two flee police there to shut down the can-can and end up wandering New York City for a short time looking for other partners to start a vaudeville act with. While wandering they come across a nickel theater and watch a comedy. They're instantly in love with the film. After some questioning, they find out a movie office in New York.

The office is run by D.W. Griffith, a director with big dreams. He and his staff (writer Jennifer, actress Maria, actor Henry, assistant Lew Cody) are working on some movies when Mack and Rudolph show up, hoping to get a job in a comedy movie. But Griffith has no interest in doing low-brow comedy. Instead, Mack becomes his assistant and learns all about the movie trade. Henry despairs over the state of American cinema, particularly comedy, and gets Mack interested in a new kind of comedy in Europe: Slapstick. Mack dreams about making the first American Slapstick film.

Meanwhile, the movie business is attracting all kinds of attention. Samuel Goldwyn is asked by his brother-in-law to help him make a movie, and he goes to ask his friend Cecil B. DeMille to join him. The two head off to Hollywood.

Rudolph has also been busy, and his girlfriend Margarete tells him she plans to run away from her domineering parents, and he's the one who is going to take her away.

Rudolph isn't the only one with love in his eyes. Mabel Normand shows up at the studio one day asking to be in a comedy movie. Griffith brushes her off, and tells her to talk to Mack. Mack asks her why she wants to be in a comedy, and quickly falls for the cheerful tomboy.

Then Griffith becomes enchanted by Mary Pickford and runs off with her to California to work on her film with Paramount. At first the staff becomes excited, because this means Mack can become the director, but then Jennifer tells them that with Griffith goes all of their funding.

It's at that moment that Mack receives a note, an order to meet Adam Kessel and Charles O. Bauman. Mack owes these two "businessmen" money that they lent him to post his bail when he got caught by the police at a can-can show. So Mack goes to meet them without much enthusiasm. But Kessel has heard about the new movie craze, and wants to get in on it to make a buck. How lucky, then that he knows someone in the business that owes him money! When Mack hears this he turns the situation to his advantage by asking the men for a money loan which he promises will be repaid with ten times the amount. The new studio's name will be Keystone.

Everyone leaves for Hollywood!

There Keystone Studios begins a good streak, producing films featuring bumbling policemen (the Keystone Kops) and women in bathing suits (Sennett Bathing Beauties). Mabel becomes very popular. So popular, in fact, that a famous director (William Taylor) demands she play the part of the heroine from his book, or else Goldwyn and DeMille won't be allowed to make it. The two visit Keystone Studios and talk to Mack. At first he refuses, because he has just gotten commercial funding for a feature-length comedy staring Mabel. But Goldwyn and DeMille convince him that Mabel should be allowed to become a real actress in a real film. Mabel overhears all this and becomes infuriated. She demands that Mack throw the men out, because isn't she necessary for Keystone? When Mack prevaricates she slaps him and runs off with Goldwyn and DeMille, swearing never to come back.

Mack quickly decides to go after her. He gets the gang together, and the "police" and "bathing beauties" distract the MGM men while Mack sneaks in to talk to Mabel. He convinces her to return with him. In the ensuing melee, Mabel manages to hit Goldwyn's fiancÃ©e in the face with a pie when aiming for Goldwyn, and the pie-in-the-face trick is born.

Just as Mack and Mabel are relaxing, though, Maria comes with awful news. Rudolph is in the hospital, having attempted suicide. He slit his wrists when Margarete left him and got engaged to a lawyer. And just at that moment, America declares it's intention to join WWI. (Okay, this has me officially confused, because Mack mentions that it's Independence Day, and didn't Congress declare war in April of 1917?)

The war is over, and the Roaring Twenties begin. Samuel Goldwyn gets married. Mack leaves Keystone Studios to start his own, and Keystone eventually declares bankruptcy and closes. Mabel joins MGM, and becomes William Taylor's lover. At Goldwyn's wedding party, all of the old Keystone group meets once more. Suddenly, Rudy arrives, completely drunk and makes a slight scene. As the party continues, Jennifer comes out and tries to talk some self-confidence back into him. She leaves to fetch him some water. Henry's girlfriend Virginia appears, and tells him that she's not really Henry's girlfriend, she's just out to make connections with everyone who can help her to become a star. Rudy invites her to his hotel room.

Jennifer comes knocking on his door, looking for him, and a dazed Rudy comes stumbling out, saying Virginia suddenly started acting odd and he thinks she's dying. Henry rushes in, and Virginia collapses in his arms and dies. The rumor mill starts right away, saying that Rudy forced Veronica into his room, and when she tried to leave he strangled her. Rudy suffers from terrible guilt, but continues to protest that he didn't do anything to her. He realizes that his film career is probably ruined.

Time passes. Mabel directs a film with Rudy as the star, despite Goldwyn and DeMille's advice that he has a ruined reputation and is bad luck now. The movie flops terribly.

Mack receives a surprise visitor. Taylor says he has come to ask Mack to visit Mabel, because she's not doing well and he knows a visit from Mack, whom she talks about often, will cheer her up. He also admits to being a fan of Mack's movies, and the two part amicably.

Mack decides then and there to make a film once more with Mabel and Rudy. He doesn't want to use his studio's money, so instead he goes to see Kessel and Bauman. Those two have moved up in the world, becoming banking moguls. At first they don't want to support such a risky venture, but then they're reminded how it was their original deal with Mack that got them so much in the first place. They agree.

Mack runs into an unexpected snag with Mabel, who tells him that she's going back to New York with Taylor to start a stage career. Mack wishes her luck and leaves. It's shortly thereafter that Taylor is murdered in his own home. The murderer is never found, and Mabel is thrown into the cruel rumor mill once more.

At last Mack gets to make his film with Rudy and Mabel, which becomes a big hit. Unfortunately, shortly thereafter she is involved in another scandal, where her chauffeur kills her lover Courtland Dines. Mabel leaves Hollywood, escaping into a marriage. Rudy and Jennifer live together until his death many years later. Although they separate, Mack tells us that they talked on the phone once, and Mabel told him: "When I die, I'll see you again." She passes away thirty years before Mack.

Returned to the old Mack Sennet, we see him wake from his daydreaming to find that "Tomboy", his big hit with Mabel, is playing on the TV.