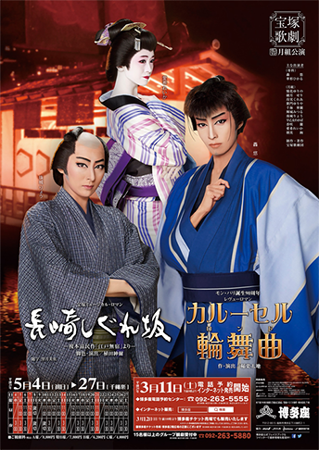 In the late Edo period (the mid-19th century), Nagasaki is still the special place which is open to the outside world. Other than Nagasaki, the Tokugawa shogunate has kept Japan in isolation since the mid-17th century. Dejima, a fan-shaped artificial island used as a trade post and a place of residence for the Dutch, is in Nagasaki Harbor, while the immense Chinese Quarter is located at Juzenji in downtown Nagasaki. Although the magistrate to Nagasaki officially administers the Chinese quarter, the Chinese Quarter enjoys certain kinds of extraterritorial rights. Therefor the magistrate cannot actually interfere in its affairs without good reason.

Isaji burglarized many residences of feudal lords in Edo and killed quite a few people along the way. Five years have passed since he ran away down to Nagasaki and took sanctuary in the Chinese Quarter. As long as he is in the Quarter, he is out of the reach of policemen of the magistrate's office of Nagasaki. Unosuke is one of the policemen. He had been a detective of the magistrate's office in the northern part of the city of Edo. He has come down to Nagasaki in the pursuit of Isaji and is still looking for him. He publicly declares that he will arrest Isaji at all costs.

One day, Unosuke happens to come across his childhood friend Oshima on the beach and invites her to go with him to the chinese Quarter. He talks Isaji into coming with him to Shigure (late autumn shower) Hill Road where Oshima waits for them. Three friends from childhood, who had parishioners of Kanda Shrine in Edo, meet again for the first time in 20 years in remote Nagasaki. Expelled from the census register of Edo and wanted by the police, Isaji drifted down to Nagasaki. Unosuke now serves the magistrate of Nagasaki as a low-rank policeman. Oshima became a geisha in Sakai, and has come to Nagasaki accompanying her patron on a business trip. They think back about the paths they each have followed and wonder where they each took the wrong turn leading to where they stand.

Isaji longs for the sight of Edo ever since he met with Oshima, so much that he comes to wish to leave the enclosure of the Chinese Quarter. Then, he learns that one of his followers Rasha has not come back since he was called out of the enclosure by Bora who works as a feeler for Isaji. Unosuke dissuades Isaji from rushing to the rescue warning that he would also be killed if he went outside the enclosure. Isaji manages to deliver Rasha. However, Rasha is severely injured and dies shortly afterward. In fact, Rasha became a victim of a scheme invented by the policemen of the magistrate's office. According to the scheme, Isaji should have lost his wits and gone out of the enclosure.

Isaji wanders and comes across Oshima again on Shigure Hill Road. They smell a fragrance of Edo from each other, which makes them feel homesick. They remember the days they had spent together with Unosuke just like brothers and sisters. Isaji mutters in spite of himself that he feels like going back to Edo. Oshima proposes returning to Edo and starting a new life together.

Unosuke tells Oshima's patron Shobei Izumiya a rumor. It is that Izumiya is a smuggler who uses Oshima as she frequents the Chinese Quarter. He also reveals that he suspects there is an affair going on between Oshima and Isaji. Shobei says that he will sail out to sea ahead of time and that it is up to Oshima whether to go back to Sakai with him or not. Oshima reproaches Unosuke for having told on her. Unosuke says she might as well go to hell as go with Isaji to Edo. He doesn't want her to undergo a series of hardships. Oshima is the very woman he once loved. At last, he tells her that Isaji would be killed once he leaves the Chinese Quarter. After due consideration, Oshima decides to go with Shobei.

Isaji is exasperated at Oshima who has not shown up on time. Unosuke comes forth instead and tells him that she has gone back to Sakai. This causes Isaji to run outside. Unosuke stops him with all his force. Isaji tells him that he is not about to follow Oshima but just wants to go a step closer to Edo. Hearing Isaji's heart, Unosuke at last reveals to Isaji the true reason why he has come down in pursuit of him. As a matter of fact, Unosuke has been pursuing Isaji not to arrest him, but for an entirely different reason.....