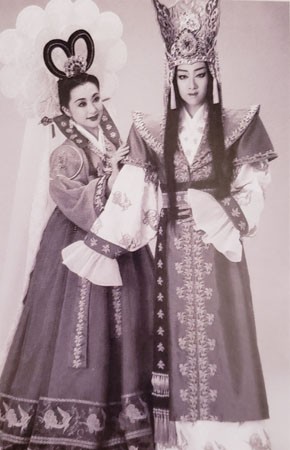 The second half of the 17th century. Joseon Age in Korea.

Because his grandfather was a military man, Cho Lon-Yeon chose to follow in his footsteps, took the civil service exam, and has become adept in both the literary and military arts. One day he meets gi-saeng student Kim Sugyon in a garden under the blooming flowers, and falls in love. Sugyon also falls in love with him at first sight, but her mother convinces her that she isn't. However, Lon-Yeon's strong love won't be denied.

War sweeps down on the the country, and the young men go off to war, including Lon-Yeon's younger brother. They all head off to die in the war. Lon-Yeon also must part with Sugyon and go to protect his country. He is captured by the enemy general, Abing, who wants him to join and fight for his side. Lon-Yeon plans his escape with another captured soldier, Kyongnam.

Unfortunately, Abing's daughter Konran has fallen in love with Lon-Yeon. Abing's adjutant Kan sees this and fears that he'll lose Konran, whom he loves, so he plans a way to kill Lon-Yeon.

Meanwhile, Sugyon and her maidservant set out to find Lon-Yeon. Along the way, Sugyon is rescued by the Yu pirate brothers when she is in trouble. The elder brother, Geumjeong, falls in love with her beauty and vows to make her his. However, when he sees that he can't win over her love for Lon-Yeon, he promises to help her find him.

But there is still more trouble ahead for the two lovers....