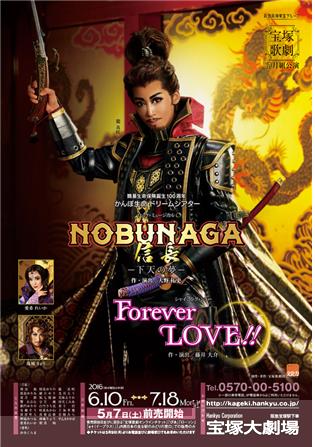 English summary from the program.


Nobunaga: The Will to Power
Japan is at war with itself. At Okehazama, Oda Nobunaga (Ryuu Masaki) of Owari, rumored to be a fool, spectacularly defeated Imagawa Yoshimoto of Mikawa as he was leading a much larger host than Nobunaga's toward the capital city, Miyako (modern-day Kyoto). Nobunaga has decided to take Yoshimoto's place and lead his own forces to Miyako, so he is compelled to ally with the Azai clan in order to suppress Mino, a province lying between Owari and Miyako, by having his younger sister Oichi wed Nagamasa, the Azai clan's sucessor. However, Mino is also the birthplace of Nobunaga's wife, Kichou (Manaki Reika). Her former retainers and people are in Mino, and Kichou is vehemently opposed to the province's destruction, even if it is now in the hands of an enemy who overthrew her father, Saitou Dousan. But Nobunaga, who has embarked upon his path to conquest, holds to his course.

Ten years later, Nobunaga has conquered Mino and marched into Miyako. He has become war incarnate and continues to slaughter his enemies, instilling terror in the populace, who call him a king of demons. In the midst of a standoff with his next foes, the warrior monks of Mt. Hiei, Nobunaga happens to meet Roltes (Tamaki Ryou), a knight from Rome who is working with Christian missionaries. Out of mere curiousity Nobunaga asks Roltes how he would capture Mt. Hiei, to which the knight replies he would set the foot of the mountain afire to destroy the monks.

Nobunaga's decision to bathe Mt. Hiei in flames causes shogun Ashikaga Yoshiaki (Saou Kurama), who had been asked to mediate a peace between the two sides, to severely lose face, and he vents his rage on his retainers and concubines. Then Roltes, accompanied by Francisco Cabral, who leads the Jesuit missionaries in Japan, comes to Yoshiaki to seek permission to build a Christian church, Namban-ji. Speaking smoothly, Roltes ingratiates himself to Yoshiaki to put the shogun in fine spirits. Afterward when Yoshiaki takes his leave, he is sent off by Akechi Mitsuhide and Hashiba Hideyoshi, who then talk and find complete agreement in their assessment that Nobunaga, regardless of whether he was considered a dunderhead, is now on the verge of uniting the entirety of Japan under his rule.

Nobunaga has now returned to Owari, his first visit there in a long while. He stops for a while in the wilderness near Kiyosu Castle, where he laments the deaths of the numerous foes he has butchered and comes to clearly see the path he must follow. However, the air begins to thicken with a disquieting mood..

Forever LOVE!!
The theme of this Show is unending, ever-shining love, telling of love in all its variegated forms. It's a powerful display of charisma from Masaki Ryu, the Moon troupe's top star, who possesses incredible singing prowess and a modern, yet at the same time classical, style. Delight in an energetic, dramatic stage of love presenting the versatile styles of the exceptionally unique Moon troupe members.