Loading...
God of Stars / Éclair Brillant
READ THIS BEFORE EDITING THIS PAGE 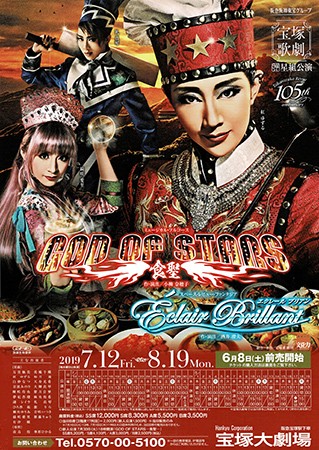 At Marina Bay Sands Singapore, the “God of Stars Contest” is held to determine the “Saint of Cuisine”—the best chef in the world. Amidst the glitz and glamor of top chefs from around the world coming together for this event, we find Hong Xing-xing, a brilliant, three-star master chef at the Shanghai-based chain restaurant “Golden Star Group.” Hong, whose eminence, skill, and ability to appeal to the five senses are without compare, gathers the attention of all around him by planning such things as the construction of a theme park built around his self-created dishes. Suddenly, a woman appears and says she must speak with Hong. That woman is Eileen Chow, who runs a restaurant in Paradise Market, where Hong intends to build his theme park. She has come here to tell Hong, right to his face, that the hawker centre, the street stall district her ancestors struggled to build up, will not be handed over to him. Hong pays this no heed, but with his mood hurt the contest itself is forced to be postponed. Eric, the CEO of Golden Star Group and Hong’s mentor, is shocked by Hong’s arrogance, and comes to a momentous decision...

A few days later, Eileen discovers a collapsed Hong in front of “Aili Restaurant,“ the restaurant she manages. Having been accused of a crime of which he has no knowledge, he has not only been sacked but forced into bankruptcy. This was all the result of Eric’s scheme, and Hong’s job was taken over by his apprentice Lee Dragon. Hong, who has had everything he worked for stolen away from him, is determined to get revenge, and so decides to lend a helping hand to Eileen, who runs a restaurant with her gang in place of her father, who has gone missing.

Sparks fly between proud Hong and spunky Eileen, and the two don’t get along, but their shared passion for cooking allows them to find common ground, and together they bring prosperity to her restaurant. Ultimately Hong, who desires to reclaim his lost honor, declares that he will challenge the treacherous Eric and Lee in the “God of Stars Contest,“ which is due to be held three months from now. Hong and Lee will both make their secret recipe: the “Manchu-Han Imperial Feast (full-course meal).” On top of this, it is decided that if Hong loses the contest, the Paradise Market ownership rights will pass over to Lee.

Now it has finally come to the day of the contest. Challenger Lee enters the venue in an extravagant fashion. But... Hong is nowhere to be found... As the crowd begins to become restless, Eileen, certain that Hong will show up, makes the decision to challenge Lee in Hong’s stead while they wait. Will Hong show? And what will become of his wager with Lee...?

This beautiful, gorgeous revue portrays a young man who floats down from space to earth, and sings and dances across the globe. Combining the classical revue, into which Takarazuka Revue has put a lot of care, with a touch of the modern, this performance is brought to you in a lively and energetic style. We hope you enjoy this brilliant drama that is overflowing with glistening splendor, brought to you by Yuzuru Kurenai in harmony with the Star Troupe.