Loading...
Ghost Detective
READ THIS BEFORE EDITING THIS PAGE 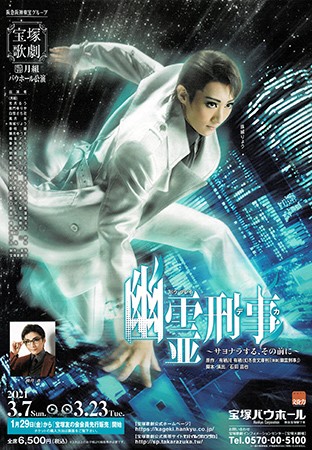 Love and a classic mystery are blended in Arisugawa Arisu's mystery novel "Ghost Detective", a heartwarming musical which will make a memorable Bow Hall appearance for Tamaki Ryou.

Detective Kanzaki Tatsuya of Hatou Police Station was unexpectedly shot to death by his boss on the beach at night.... But because Kanzaki was waiting for his wedding day, and because he has no idea of why he was killed, he cannot pass over and he becomes a ghost. His mother and his fiancee Mori Sumako can't see him, and so Kanzaki is tormented by his ineffectiveness. Only another detective, Hayakawa Atsushi, who is from Aomori and has the blood of spirit mediums can see him and hear his voice. Kanzaki tells Hayakawa (the only one he can communicate with) about the details of the case, and since "a ghost detective and a medium detective make the best combo, no?" the two set out to investigate. But before the case is resolved, Kanzaki senses that he has to say farewell and ascend....