Loading...
Elegy of Autumn / Broadway Cinderella
READ THIS BEFORE EDITING THIS PAGE 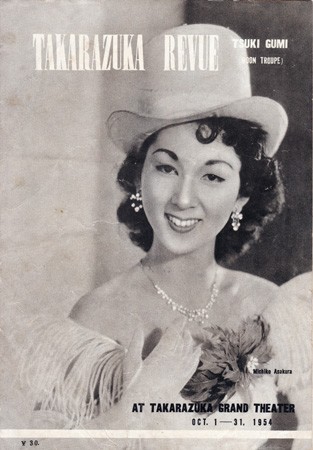 (From the official English pamphlet.)

Abe Yasuna, formerly a samurai of some repute, is now leading a rural life with his wife, Kuzunoha, and his son, Doji, after his retirement. Autumnal sunshine is bright in the hamlet and the sprightly village children are enjoying the annual festival. Forbidden to go out, Doji, however, is reprimanded by Kuzunoha. Upon hearing a rumor that he had stolen a chicken from a certain villager, Kuzunoha is trying to force him to confess whether or not he really did. The boy denies it but the mother, who has no trust in what he says, continues to accuse him. Just at this time, Yasuna appears on the scene and lets his son go out to join the village children.

Kuzunoha then bitterly attacks him against his generosity toward his son, even declaring that his generosity is due to his still smoldering affection toward his former "wife," a fox wife and the real mother of Doji. Kuzunoha heaps all sorts of abuses upon him, telling how bitterly the villagers are speaking ill of him behind his back and how unbearably ashamed she is of herself as the wife of a pusillanimous man who had married a fox. Having decided to return to her parent's home, she leaves the house.

Doji who went out to see the festival is not happy. The village children are too cruel to him and even an adult derides him as a son of a fox. Ill-use on his step-mother's part and the villagers' cold attitude make him yearn for his real mother, the fox.

Meanwhile the mother fox, who had returned to the Shinoda Woods after the appearance of the real Kuzunoha, has been anxious about Doji day and night. She has made up her mind to call her son to her nightly by her magical power. At the dead of night, the boy, who is completely entranced by her magic, comes to the woods to see her.

Yasuna who notices that his son is out, comes to the woods, searching for him. Perceiving Yasuna approaching toward her, the mother fox immediately hides herself. The father finds his son who is asleep. With his son on his back, Yasuna, who has already noticed about the nightly reunion of the mother fox and Doji, calls out in the dark woods in order to tell her that he is awaiting her return and wishing to live together secretly in some place out of sight and sound of human habitation. At this moment, Gonroku, a hunter by occupation, happens to pass by and meets with Yasuna and his son. Told by him that he is searching for a white fox to present it to the Shogunate for an enormous reward, Yasuna feels an ominous presentiment.

In the field of Manjusaka illumined by the setting sun, the mother fox, who has been anxious about her son who has ceased to come to her, unexpectedly hears village children saying to each other that Doji is seriously ill. Unable to contain herself, she immediately goes to see the ailing son.

The mother fox reaches Yasuna's house from where is heard the voice of Doji calling his mother's name. Without noticing Gonroku, the hunter, aiming at her, she is about to open the paper sliding-door. The hunter fires his gun and the bullet strikes her. Surprised at the loud report of a gun, Yasuna comes out of the room but he cannot see anything. Just then, a vague apparition of the mother fox appears before him, telling him that she was killed by Gonroku. The ghost begs him to take care of their son and then disappears. Yasuna leaves his house in a hurry.

Yasuna catches up with Gonroku, who is returning home with the corpse of the white fox, and asks him to give it to him. The hunter coldly rejects Yasuna's request. However, the hunter, at last, defeated by Yasuna's persistent plea, throws the corpse down on the ground.

With his ailing son, Yasuna goes up on ah ill where he cremates the remains of the white fox. From the bottom of his heart, he says to his son: "Your mother was an ill-starred creature. She had a more profound spirit than any humen being. Be proudof her and never hesitate to say, 'My mother was a fox and I'm a son of a fox.' "

Then he continues: "My wife! If your soul is still wandering around here and can hear what I say, though your body has returned to clay, please listen to me. You are none other than ,my wife and mother of Doji." His sorrowful voice fades away in the darkness of evening while the smoke of cremation is growing thin. And echoing through the air is the voice of Doji, calling his dead mother..... "Mama! Mama!"

In a small town in the West of America, there lives a girl, Cindy by name. She has such beautiful features and so sweet a nature that people call her Cinderella. Good at singing and dancing, she has been yearning for Broadway for long while the townsmen believe that she would become a big star. When her parents die, she makes up her mind to go to New York as her father's old friend, Emily, has been working at the Broadway Theater as a dresser.

In a train bound for New York, Cindy happens to ride in the same coach with some traveling troupers--three girls, Sally, Elly and Mary; Peggy, a dancer; three tap-dancers, Tappy, Pappy and Poggy; Lou, a singer; Mixia, a whiskered musical composer. Mixia has been composing the music for a brand new Cinderella show which he has named "Broadway Cinderella." He tells them about his composition, adding that "Broadway Cinderella," when staged, will surely make a smash hit. Cindy and the troupers, who are attracted by the Broadway life, as each and every artist is, fancy their future selves singing and dancing on Broadway.

Montgomery, stage-director of the Broadway Theater, has invited Irene, a popular actress, from London to play Cinderella. A little eccentric, she is said to be wearing rustic clothes and she speaks and behaves as if she were Cinderella. When Montgomery is waiting for Irene who is scheduled to arrive in a little while, he is visited by Flysher, a producer and his rival. Puffed up with success in inviting a popular London actress, Montgomery chaffs him.

Just at this time, Cindy arrives. Newspapermen and Montgomery take this rustic girl for Irene. Interviewed by the newspapermen, Cindy is a little confused. Although she denies she is Irene, her answers seem to the newspapermen and Montgomery to be quaint and kidding them, and they more and more believe that she is the eccentric London actress. She asks Montgomery to let her see Emily. After Cindy leaves the place to see the dresser, Irene herself arrives. Finding out that the second girl is the real Irene, Flysher jumps up with joy and, in order to outwit his rival Montgomery, he offers her on the spot, a contract to appear in his show. She consents.

Cindy meets Emily, who has been disappointed in love with Cindy's father over two decades before and had come to New York, became an actress and obtained fame. While talking with Emily, Cindy finds out that she was mistaken for Irene. Emily tells Cindy that she would do everything Cindy wishes. Then Cindy says that she wishes for once in her life to wear a beautiful dress. The dresser lends her a new costume.

Now dressed up. Four boys invite her for meals but she rejects their offer, saying that she has a husband--a most effective way of protecting herself against unwelcome advances, which she was taught by Emily. Then Golden, an aged show proprietor, invites her to dinner. She goes out with him. Meanwhile, Mixia and his troupers call on Montgomery at the theater to sell Mixia's musical composition. But Montgomery coldly rejects Mixia's offer.

At a certain hotel in downtown New York, Flysher and Irene work out a plan to stage a show similar to that which Montgomery is planning to produce. To the same hotel, Golden brings Cindy. In the foyer, Poggy, Pappy and Tappy see the couple and plan to save her as they know Golden is a notorious roue.

In a room of the hotel, Golden asks Cindy about herself, her background and her husband. Despite the efforts of Poggy who disguises himself as a waiter of the hotel to save her, Golden tenaciously continues to ask her her husband's name, even saying that he will exert strenuous efforts to let her husband get on in life. HE opens her handbag and finds a name-card of Mixia. Getting an idea, she declares that Mixia is her husband and, as a bargaining point for her stay there until 12 o'clock, makes him promise her to use Mixia's musical compositions.

Golden who has an ulterior mind puts a sleeping drug into the champagne without being noticed by the girl. But she is saved by the three tap-dancers. (Feigning a woman's voice, Tappy calls up Golden by phone and, without telling "her" name, says that "she" is now one of his girls, the lovehunter is astonished and goes down in a hurry. The three dancers rush into the room. They find out that the drink contains a sleeping drought and suggest she give it to Golden. She does when Golden returns to her. The lovehunter falls into a deep sleep.)

At the Broadway Theater, Montgomery is in a furious rage as he reads a story in the papers that Irene will appear in Flysher's show. (Montgomery, who realizes that he has mistaken Cindy for Irene, has been searching for Irene.) But he makes up his mind to produce Cinderella show as scheduled with Cindy as the main character. He orders his subordinates to search for Cindy.

Cindy calls on Mixia and tells him what had happened in the hotel room, adding that Golden is visiting him in a little while. Golden calls on Mixia and he promises him to purchase his musical composition. During the conversation, Cindy keeps pretending to be Mixia's wife. After Golden has left the room, Emily, Poggy and others come in and tell her that Montgomery is producing a new show with Cindy as Cinderella.

Thus the curtain of "Broadway Cinderella" rises to the great happiness of all—Golden, the lovehunter, who for the first time did a good thing for someone else, Emily who had lent a dress to Cindy, by which incident, Cindy could become Cinderella, Cindy who could obtain a Prince—Mixia, and Mixia, who having shaved off his whiskers became handsome, gets a Princess Cinderella--Cindy.