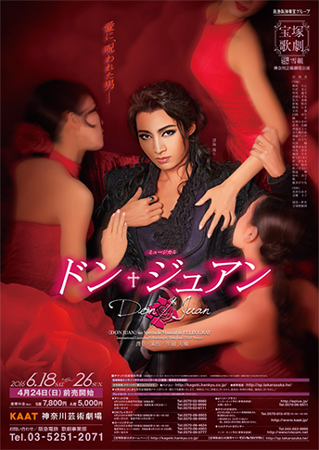 This work, adapted into a play by Molière and an opera by Mozart called "Don Giovanni," is more commonly known throughout Europe as "The Legend of Don Juan." A passionate gem of a masterpiece made into a musical, it is set in Spain and rooted in Flamenco. In 2004, it premiered in Canada, was later staged in Paris and South Korea, and was extremely well-received. This will be Japan's first rendition of the French musical "Don Juan."

Women and wine. Always seeking pleasure. Captivating the hearts of countless maidens is the sexy playboy, Don Juan. One night while enjoying the company of a woman as usual, Don Juan angers the Grand Master, the woman's father, which leads to a duel. Don Juan emerges victorious but the Grand Master's dying words are: "Someday love will punish you..." Before long, those ominous words manifest themselves as a curse and an apparition haunts Don Juan.

After the incident, unheeding the curse, Don Juan continues to lust insatiably. But as it just so happened, by fate Don Juan meets Maria, the daughter of a sculptor who is creating a statue of the slain Grand Master. And the "curse of love" begins to afflict Don Juan...