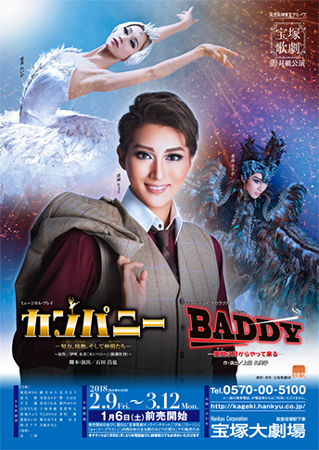 † Grand Theater only; on 03/27/2018 Otokaze Seiya was announced absent from the entire Tokyo run and Tokyo shinjin kouen due to an injury.

Young Aoyagi Seiji’s life fell apart when he lost his wife to an illness, and his life seems to be on hold even as he continues to work for Ariake Pharmaceuticals, toiling through passionless days with only memories of his beloved to sustain him.

Ariake Pharmaceuticals announces a merger with another company, Healthy Foods, to form a new company “Ariake Foods & Pharmacy,” leading to a spate of new projects and prospects. The TV advertisement song titled “Breakthrough” is performed by Barbarian, a popular vocal and dance unit led by Minakami Nayuta. Marathon runner Suzuki Mai, previously sponsored by Ariake Pharmaceuticals, will continue to be the face of the new company, in addition to working toward qualifying for the Olympics with trainer Segawa Yui. Additionally, Ariake Foods & Pharmacy announces a memorial performance to commemorate its founding: “Swan Lake” by the Shikishima Ballet Company whose members include Ariake Sara, daughter of the company president, and led by world-renowned principal Takano Haruka, the brand ambassador of Ariake Pharmaceuticals. Against this backdrop, it is revealed that Mai is pregnant and Yui is held responsible, being told by executive officer Wakisaka Eiichi that Mai’s contract is terminated. Aoyagi’s efforts to talk the executive officer into reconsidering end in vain, and both Aoyagi and Yui are assigned to the Shikishima Ballet Company.
As general producer—a job completely outside of his expertise—Aoyagi heads for the hotel where Haruka is staying, with Sara and Yui—assigned as Haruka’s new assistant—to meet Haruka, who didn’t show up for their appointment.

Haruka, touched by Aoyagi’s sincerity and selflessness, confesses that he has serious problems stemming from continuing to dance through injuries, making him incapable of playing the role of the prince in “Swan Lake.” He requests instead the part of the devil Rott Barte, who has limited appearances in the show. He also emphasizes that what is important is not the love of your boss, but to be loved by the audience—they are a fellowship, part of the Company—and that Aoyagi’s current mission is to guide the show to success.

Through his many encounters in the Shikishima Ballet Company, Aoyagi learns that many dancers are fully committed to dancing while making their living on part-time jobs—among them, ballet dancer Takasaki Minami. Minami develops feelings for Aoyagi, who frequents the convenience store where she works part-time, but at the same time she senses his undiminished love for his lost wife.

Meanwhile, Aoyagi strives to direct the ballet performance to success. His life, once on hold, starts moving again...

Baddy
~The Bad Lot Comes from the Moon~

The story is set in the capital of Earth, Takarazuka-City. The peaceful planet Earth — a united world where war, crime, and all evils have been overcome — receives a visit from Baddy, a vagabond rogue from the moon. Baddy is a super-cool, elegant, and a heavy smoker. But he soon finds that smoking is outlawed across the face of the Earth. Baddy, accepting no limits, leads his gang and engages in all sorts of wrongdoing to make the dull world more interesting. His final goal is to steal the planetary budget guarded in Takarazuka Big Theater Bank. But all-mighty female investigator Goody is gaining on him!