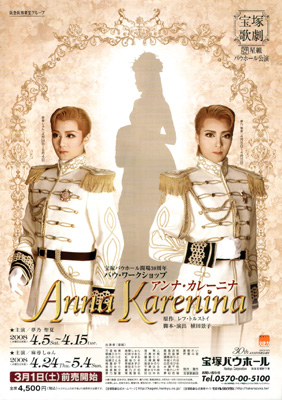 At the railway station to meet Anna, Stiva bumps into Vronsky. Vronsky is there to meet his mother. Anna and the Countess Vronskaya have travelled together in the same carriage and talked together. As the family members are reunited, and Vronsky sees Anna for the first time, a woman jumps in front of a train and is killed. They say she has been waiting for her lover to return, day upon day. Anna is darkly fscinated by someone who would die for love. Vronsky is infatuated with Anna.

In Petersburg, Anna and Vronsky attendsa show at the theatre at which all of Petersburg's high society are present. At the theatre, Vronsky's mother makes a deliberate scene, asking how much longer Anna can keep her son's love by beauty alone. Anna is devastated and collapses.

It becomes clear that whilst Vronsky is able to move in Society, Anna is barred from it. She starts to become very jealous and anxious that Vronsky no longer loves her. Anna uses morphine to help her sleep, and now she has become dependent on it.