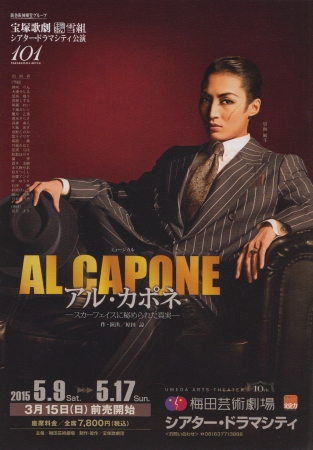 
WARNING!! MAY CONTAIN SPOILERS!!
The year is 1929, in a prison in New Jersey. Here, wearing a Divan watch too extravagant for the setting, sits one man: Al Capone. As everyone knows, he’s an American gangster. In a cell arranged especially for him, he gulps down law-prohibited bourbon, next to him sits the script for a new Hollywood screenplay that is in production. The title is “Scarface.” It is plain that that word represents Al. Before the writer of this script, Al begins to tell the lesser known “truth of Al Capone.”

We turn back to 1917. Born a second-generation Italian immigrant, Al, resigned to his impoverished circumstances, was working earnestly in a Brooklyn club, every day sending away the living expenses he earned. One day, a new showgirl named Mary enters the club. This Irish girl was forced to live a difficult life owing to the debt left by her father. It takes no time at all for Al and Mary, facing similar circumstances, to be drawn to one another. Just as the two had relaxed their guard and began to open up their hearts to each other, a gang appears in pursuit of Mary. Al, heroically standing against a man wielding a knife, protects Mary from the gang, and sustains a deep gash to his face as a result. Mary is tormented by guilt over the scar that saved her life, but Al insists that it’s no big deal. He wants to build a happy home with Mary—it’s the bud of a modest wish within Al’s heart.

However, although he possessed both bravery and intelligence, Al kept taking hits from his surroundings. Johnny Torrio, a big-shot in the Italian Mafia, recognizes Al’s aptitude and suggests that he try his hand in Chicago. Al, wanting to succeed at a respectable job for Mary’s sake, refuses instantly. But the moment Johnny’s gaze moved to the scar on his cheek, Al came to realize that it’s already impossible for him to exist in regular society. He places his faith in Johnny’s assessment of him, and decides to bring Mary along to Chicago.

Al begins working in a club operated by the boss of the Chicago outfit of the mafia, and exhibits his business acumen amply. He’s not even phased by the just-enacted Prohibition law that shocked America; rather, he views it as an opportunity, and lays plans to pioneer a route to allow for the illicit manufacture, smuggling, and sale of the alcohol they would be using. In pursuit of the American Dream, Al works vigorously toward his enterprise. However, success in the underworld naturally comes packed with danger. When Al learns that the boss of the Chicago outfit sold him and Johnny out to the police, he quakes with rage. Boss or not, he can’t forgive ANY traitor. Beginning with a single shot from Al’s gun, the citizens of Chicago become entangled, and a mafia battle begins, blood washing away blood……