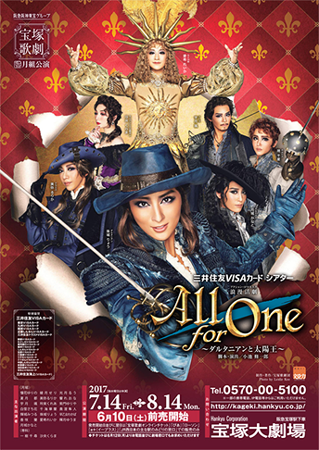 Show Information
English Title: ALL FOR ONE ~d'Artagnan and the Sun King~
Japanese Title: 『ALL FOR ONE』～ダルタニアンと太陽王～
Romanized Title: All FOR ONE ~Darutanian to Taiyouou~

† Announced 7/8/2017 Remi Kurea will be out for the entire Takarazuka run do to injury. The role of Isabella will be taken over by Kousaki Ran

ALL FOR ONE ~d'Artagnan and the Sun King~

It is 17th-century France, where Louis XIV, the "Sun King," reigns. The Musketeers, who answer to the king, diligently train themselves day in and day out to protect their liege and the state. Each of these highly skilled warriors also has a unique personality: Porthos is courageous and daring, Athos is calm and reassuring, Aramis is a ladies' man like none other in his time, while d'Artagnan is our invincible hero. All, meanwhile, are utterly proud and brave warriors.

One day, d'Artagnan receives orders to instruct Louis XIV in the art of fencing. At present, however, the king is fascinated with ballet, and no matter who attempts to coach him, he exerts no effort whatsoever in his fencing lessons. Thus it has come down to d'Artagnan, a particularly gifted swordsman among the Musketeers, to tackle this challenge. One day, d'Artagnan and his royal student have an audience: Cardinal Mazarin, who is attempting to foment discord within the palace; Anne, the king's mother; the Duchess of Montpensier, his cousin; and Bernardo, Mazarin's nephew and the captain of the guard. d'Artagnan and the king agree to have a bout for their onlookers. d'Artagnan attempts to take it easy on the king, who is weak by nature, but the lessons have stirred a fire within d'Artagnan such that he inadvertently defeats the king. Louis XIV is outraged and says to d'Artagnan, "You can resign from the Musketeers, or I shall disband them all for having such an insolent comrade among their ranks!" d'Artagnan is depressed, and that night the Three Musketeers – Aramis, Athos and Porthos – try to cheer him up at a bar frequented by the Musketeers. Guardsmen commanded by Bernardo then enter the establishment. When the Musketeers speak ill of Cardinal Mazarin, chaos breaks out. During the confusion, d'Artagnan happens to save a lass named Louise from getting tangled up in the melee. When she learns of d'Artagnan's audiences with Louis XIV, she inquires about the king, in whom she is deeply interested. Even though they have only first met, d'Artagnan finds his heart stolen by this vivacious woman.

d'Artagnan is eventually summoned again to the palace, where he learns of an incredible secret that will shake the very foundations of the House of Bourbon. d'Artagnan and the Three Musketeers will rise up to bring happiness to Louis XIV and the people of the world, but someone shall stand in their way...

"All for One, One for All"
The Musketeers remember their motto to unite their zeal as they raise their swords.