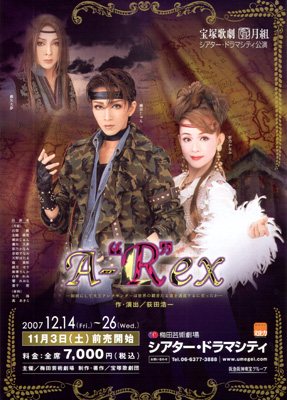 A show musical painting a picture of the short and intense life of the historically famous king of Macedonia, Alexander III, with pop music which is sometimes comical, sometimes surreal.


356 BC, the impoverished Greek world is at war with Persia. Born king of the remote region of Macedonia, Alex is pressured to make a decision on the sudden death of his father, who had united chaotic Greece. Namely, will he continue his father's war or not? Many different people, and gods, have expectations.

One of these is his mother, Olympias. While his father was alive, she stood against her husband, and criticized the war. Now she endorses it for the glory of her son and the future of the empire.

Another is the goddess Athena. The guardian deity of the leading Greek city-state of Athenia conspires with Poseidon, guardian deity of Sparta. Together they undertake to make this untested king of remote Macedonia the leader who will restore the Greek world. The goddess directs a messenger to go personally to the worried Alex.

Athena's messenger is the goddess of victory, Nike. Alex falls in love with Nike, and determines to follow the path she points out to him. However, down that road there is nothing but gruesome and severe war, and he begins a campaign that will never allow him to return to his birthplace again.

Everyone spurs him on to war. He does not waver, but proceeds to the battle front. Egypt, Persia, India... His travels are without end.