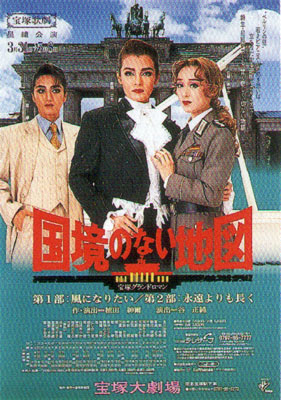 Act One: I Want to be the Wind

In 1961, young Hermann goes to the British hospital to get medicine for his mother. Because of this, he ends up on the wrong side when the Berlin Wall goes up and is seperated from his mother. He is adopted by a very loving couple and grows up to become a world-famous composer. As the show opens, it is 1988, and he performs his newest piece, called "A Map Without Borders" in New York. Afterwards, he tells the tale of how he was seperated from his mother to the press. He hopes someday to be able to cross into East Berlin and find his mother again.

His recent success and has caused a sensation in the newspapers, and a young woman named Sabine is surprised to read his story the next morning. She contacts her neighbor, Hitoshi, who is a newspaper correspondent. He in turn contacts his superior, Ishizuka, and they bring Sabine to meet Hermann, because she says she has word of his mother. Sabine, however, can't speak. Hitoshi explains that she lost her ability to speak when she was seperated from her family in East Berlin. However, she says his mother was fine as of five years ago.

Ishizuka desides a reunion would make a geat story, and arranges with Hermann to get him into East Berlin. Meanwhile, he travels around the world, even visiting a performance of the Takarazuka Theater in Japan. (He loves it, of course.) Hitoshi travels with him. While in Tokyo, a member of the East Berlin Ministry of Culture arrives. Her name is Veronica. Hermann is shocked to find that she looks exactly like Sabine! She has an invitation for him to visit ast Berlin, where he can also meet with his mother. Hermann agrees to come, but then questions her about a missing younger sister. She at first tells him she has no sister, but then when she learns that her twin sister is still alive she is shocked.

There, he is reunited with his old neighbor and her daughter. Unfortunately, they moved and lost track of his mother. An agent of the seceret police named Heinrich works to keep him isolated and unable to wander through the town to look for his mother himself. Hermann's mother sees his poster in the town, but refuses to go to see him. Her son is free, she doesn't want him entangled in East Berlin again.

Veronica's superior has noticed a change in her since her trip to Tokyo, and attcks her in a jealous rage, accusing her of being in love with Hermann. She is silent, unable to refute him, but he tells her he'll never let her go. Veronica is startled toe realise that she is no longer happy with the life she has chosen. Realizing she might never see him again, she goes to visit Hermann at his hotel. He discovers her wounds, and admits that he loves her. She finally makes a decision, and destroys the bugs in his room, before admiting the truth to him of what she is. He doesn't blame her for the choices she was forced into. Suddenly, Heinrich appears. However, he reveals that he was so moved by Hermann's "A Map Without Borders" that he remembered his own past. He says he has a way to sneak Hermann back across the border, but he'll have to go without Veronica. At first he refuses, but she insists he go.

Time passes. Hermann returns to the wall with Hitoshi and Sabine. There he meets some West Berin rockers, who are actually friends there to help them meet up with Veronica. They wait nerviusly. Suddenly spotlights and sirens sound from the other side of the wall. Gunshots are heard. at last Sabine finds her voice, as she screams for her sister.

Summer, 1989. Paris. Sabine and Hitoshi are trying to cheer up Hermann, but he doesn't want to be happy. He blames himself for Veronica's death, and tells them they can't understand what he feels. He tells them to leave them alone. He cruelly tells Sabine that if she wants him to feel better, she should leave. After all, all she does is remind him of her dead sister. He quarrels with Hitoshi and leaves. Hitoshi tries to comfort Sabine, telling her that someday Hermann will realize how she feels for him.

Hermann, we learn, has given up on making music. Heinrich appears, carrying a note that Veronica had with his mother's address. Heinrich tells him that now, more than ever, his music tells what is going on in the world today. He urges Hermann to return to East Berlin to perform once more. Hermann agrees to go, because Veronica would have wanted him to.

At his performance, Hermann suddenly entreats his audience to work for their freedom, and stand up. He is arrested and pulled off the stage by the secret police. Suddenly, Veronica's ex-superior enters, claiming to have found Hermann's mother. Heinrich tries to argue that they're not sure, but it overruled. Hermann is taken into the room, and immediately identifies his mother, but before he can speak, she claims she doesn't know who he is and that her son is dead. She cries out that it's his fault that she's been pulled in. Hermann's old neighbors arrive and agree that she's not Hermann's mother. Hermann agrees that he doesn't know who she is. The secret police take her away and determine to look into it once more.

Kaufman threatens to crush Hermann's hands if he doesn't admit to knowing his mother. Hermann allows Kaufman to torture him, and continues to claim he doesn't know her.

A huge crowd gathers to demonstrate outside of the secret police headquarters. Things begin to fall apart. The head of the secret police calls Hermann in, and apologizes for his treatment. He asks Hermann if he really believes that East and West Germany can be happy together. Hermann says he does. They argue over whether people serve the state, or whether the state serves the people. The head orders Hermann released, and Heinrich leads him away.

Hermann, although his hand has been badly damaged, is determined to play his song for a broadcast into East Berlin. His step-mother and friends beg him not to, but his step-father realizes that this is something that Hermann has to do, even if he can't play perfectly with one hand. As he finishes, Hitoshi arrives. He has brought Sabine with him, but she hasn't come into the radio studio, since she knows he doesn't want to see him. He asks them to bring her in. They speak, and he tells her he understands her feelings. He asks her to wait a little longer for him. She promises she'll wait as long as he needs, even if it's longer than eternity.

At the Berlin Wall, the citizens come forward and face off with the military. Suddenly, someone begins singing Beethoven's Symphony No. 9. Others join in, and the song gains strength. Heinrich joins them, and West Berliners appear on the wall. They begin to break the wall.

Hermann's mother appears, and refuses to listen to others urging her to find someplace safer. She knows her son will come. The wall falls, and Hermann and Sabine come through.

A Map Without Borders - Review by Ekusudei