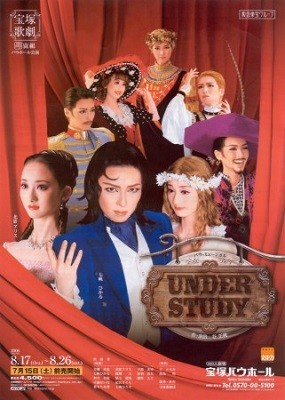 There is a pub in London's West End called Understudy, frequented by young people who love acting even though they never get any large roles. They pass the time putting on their own productions, mostly Shakespearean plays, while waiting for that one big break. The de facto lead actor is Alec Rockwood, who used to perform on Vaudeville with his family (including his younger sister, Gloria). Kevin Hathaway, who owns the bar, is highly respected among the actors because in the past he performed in many productions with the great Shakespearean actor Sir Edward Toby. But after always being second to Sir Toby he instead became his exclusive understudy, and Kevin's daughter Julia struggles to maintain confidence in her father and herself. Other regulars include Nole Goodrich, the successful president of a food company who simply loves to act, and Sir Bryan Brighton VII, a failed actor turned struggling producer. (In his case, the title of "sir" simply comes from his aristocratic family line.)

One day as the group is practicing Macbeth (in which Alec has an understudy role), a newcomer enters the bar. She sees Alec as Macbeth about to kill King Duncan (played by Sir Brighton) and cries out, genuinely convinced that a murder is taking place. Everyone laughs and reassures her that they're only acting, and Alec explains the concept of Understudy to her. Most of them (with the exception of Nole) are just poor actors having a good time by putting on shows in the bar. Alec's recent work consists of playing "Soldier #7", "Nobleman #9", etc. in Macbeth, which stars their idol Sir Toby himself. Carol relates how he performed the under-appreciated role of Nana the dog in Peter Pan, while understudying the Crocodile. Cornelius excitedly talks of auditioning for a part in a new musical production of Ivanhoe.

Eventually Gloria asks the newcomer what she's doing there. She explains that she's recently moved to London from Scotland, having received an understudy role as Fairy #17 (out of 18) in a ballet. With such a small part, she was happy to discover a place so appropriately named "Understudy", where she hoped to find others in a situation similar to her own. She is immediately accepted into the group, and Alec finally gets around to asking the girl's name. When she introduces herself as "Hermia", Alec, Carol and Sir Brighton eagerly quote lines from A Midsummer Night's Dream, briefly confusing the girl again. Everyone excitedly calls for a performance of Midsummer, with Alec as Lysander and Hermia as (obviously) Hermia. She protests that she's simply a ballerina, not an actress, but the others convince her that all performing arts require acting on some level.

Rosie, a shy girl who loves puppetry and prefers talking through her puppets instead of direct communication, is nominated to play Helena, with Carol (who seems infatuated with her) as Demetrius. When Nole hesitantly asks to be Puck, the others insist that he must buy them dinner in order to get the role. He agrees, and everyone rushes off to change into costumes while Kevin and Sir Brighton narrate the beginning of the play.

Of course the production is rather low-budget; the actors reuse Carol's "Nana" costume, making Titania (played by Julia) fall in love with a dog instead of a donkey. But it's all in good fun - even Rosie has broken out of her shell to take on the role of Helena - and just as everyone is falling in love with the wrong person, Gloria bursts in to interrupt the play. Apparently the actor Alec was understudying has broken his leg, so Alec must step in to play the role of Seyton. Everybody is excited for him, and they all look forward to Alec's shining moment.

Later, some of the members perform a song-and-dance number about Robin Hood - apparently Cornelius' audition went well, and they're all certain he'll land the role in Ivanhoe. Nole even brings wine as a preemptive congratulation gift. Julia, however, is unhappy and leaves the celebration to talk alone with her father. She really wants to become a successful actress instead of taking what small parts she can get. Kevin urges her not to give up simply because of a few bad auditions.

While Alec has been performing in Macbeth, at Understudy he is putting on Romeo and Juliet with Hermia. After the balcony scene, as they are about to kiss, Gloria bursts in again. This time it's even better news - Alec is being offered the role of Robin Hood in Ivanhoe. Both Gloria and Hermia think this is wonderful, but Alec worries about Cornelius' feelings and can't decide whether to accept the role or not. In his indecision, he recites part of Hamlet's soliloquy, "to be or not to be..."

After some thought Alec still seems hesitant to take the part, but everyone - including Cornelius - encourages him to go for it. Carol proposes a wager: will Alec continue on in Macbeth, or choose the role in Ivanhoe? The room appears to be evenly divided, and Nole offers to buy the winners lunch for a week. Hermia is the only person to abstain from betting. As Alec is about to give his answer, Gloria rushes in for a third time - but now the news is gravely serious. Their father has collapsed, and the doctor suspects a heart problem. Immediately the atmosphere changes from excitement to worry, and most everyone urges Alec to go home to his father. (Only Carol is disappointed not to see the bet through.)

Alec decides to go back to East End with Gloria, to take his father's place in the Vaudeville performances. He reflects that while it was amazing to be on the same stage as the great Sir Toby, West End isn't the only place he can act. Any theater, no matter how small, is still a theater; entertaining the audience is more important than anything else. He promises to come back to Understudy from time to time, and they all vow to persevere and continue their dream of acting, come what may.