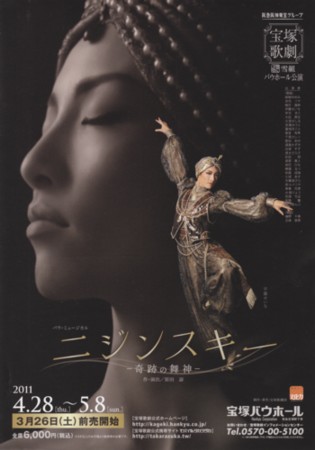 A musical depicting legendary gifted ballet dancer Vaslav Nijinsky through half of his lifetime. Romola is his wife and the love of his life; Diaghilev, the leader of the Russian ballet company "Ballets Russes", is antagonistic toward him. Set in the beginning of the 20th century in Paris — the era known as les années folles ("the roaring twenties") — a dramatic portrayal of the glory and ruin brought about by one man's overabundance of beauty and talent.

Paris, around 1910. The city is bubbling with excitement over the appearance of up-and-coming ballet dancer Nijinsky. But despite his success, in his heart he is dissatisfied. He feels that somehow he is losing the feeling of dancing with his heart that he once had. Although sensing Nijinsky's troubles, Diaghilev is intent on promoting him. This is Diaghilev's twisted form of caring, as well as the manifestation of his desires. Even as he resists, Nijinsky has no choice but to accept it; his nerves become frayed and gradually frictions arise with those around him. The dancer Romola is the one supporting him. Nijinsky continues to harbor his love for Romola, but...