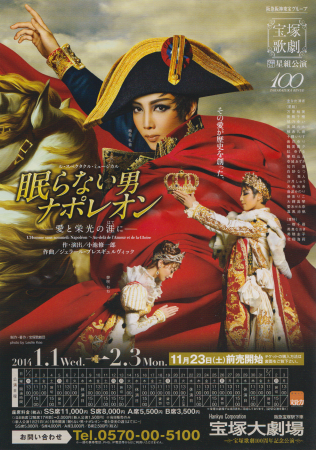 
† Due to ill health, Asamizu Ryou was absent for the entire Tokyo run. Her role in the shinjin kouen was performed by Yuunagi Ryou.

Napoléon, the Man Who Never Sleeps

This is the story of a hero, a man who rescued France from the chaos of revolution. His name was Napoléon Bonaparte. Having climbed to unparalleled heights after conquering Europe and becoming the first Emperor in the history of France, what was this hero seeking? Whom did he love? The truth behind this man who led such a turbulent life is about to unfold.

Napoléon was born in the house of a poor rural aristocratic family on the island of Corsica, a French territory in the Mediterranean Sea. He went to the French mainland as a child. He skipped a grade at a military academy and after graduation enlisted in an artillery unit. Yet in the class system of the time, in which birth determined the outcome of one's life, Napoléon lacked any hope of rising up in the world, in the way a young man from a good family would. But in 1789, Napoléon's fate is awoken, on the occasion of the French Revolution. The downfall of the aristocracy that had continued for so long leads to the Revolution, which is incited by the masses under the banner of "liberty and equality." Napoléon, who had resisted the aristocracy, sees his chance for fame amid the turmoil. At long last, several years after the Revolution had erupted, he knows that his moment has arrived. He had, in the meantime, been ordered by Barras, the supreme military commander who had noticed Napoléon's military genius, to take command of forces to suppress an insurrection by the Royalists. Napoléon lives up to Barras' expectations after suppressing the insurrection in a mere day, using only his own troops.

Meanwhile, Napoléon happens to encounter a woman who will have a huge influence on his destiny: Joséphine. He is bewitched with Joséphine, who despite being a widow with two children, possesses irresistible charm as a belle of Paris' fashionable society. Napoléon pursues her relentlessly, to the point of marriage. Yet his cherished time with her together lasts but a moment, as he is forced to make a trip to the battlefields of Italy two days after the wedding ceremony. As commander, his mission there is to rein in France's old enemy Austria. While Napoléon scores one victory after another in Italy, Joséphine, who remains in Paris, neglects to answer the letters that arrive daily and convey fervent love. Instead, she continues her glamorous life while indulging in an adventure with a new lover. News of her infidelity eventually reaches the ears of Napoléon as he wages war on different battlefields. Weary of his love becoming unrequited, he starts to consider divorcing Joséphine.

Gifted not just militarily but politically as well, Napoléon dispassionately measures up the situation in France before seizing power. He receives wildly enthusiastic support from the people, who had been demanding a strong leader capable of containing the chaos triggered by the Revolution, and his quest culminates with his enthronement as France's first Emperor. Napoléon has soared through the clouds like an eagle and risen high above to the heavens. This eagle, which has seized glory never before possessed by anyone before him, will spread his wings, while indifferent to the embarrassment of those surrounding him, to new, faraway heights.