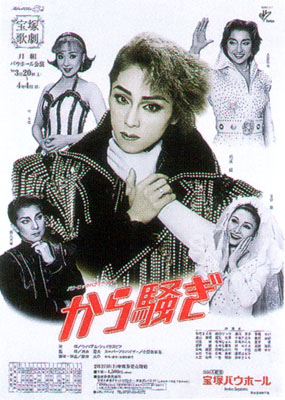 While it is based on the Shakespeare production, I think this is the loosest possible adaption that could still claim to be based on it. Rocky and Blues are a rock and roll group which have won the "King of Presley" competition and are flown down to Miami, FL to meet their new sponsor, the mega-rich rock-fanatic Mr. Palette. Palette has three children: two daughters and a son. Pearl is too shy, and Rouge talks too much. Rouge is prepared to hate Rocky on sight, and does. Rocky returns her contempt, with feeling. Blues and Pearl fall in love at first glance, but both are too shy. So their manager comes up with a plan to have them switch places at the costume party, where Rocky can woo Pearl, pretending to be Blues. This goes fairly well, except Blues gets a bit jealous. But all is smoothed over, and Blues and Pearl's wedding is announced. Next the manager and Palette decide to hook up Rocky and Rouge, and everyone is delighted to help. Everyone except Brandy, that is. Brandy is not happy about his sisters marrying and taking away what he sees as his rightful inheritance. So he plots with his underlings to break up the two couples.

Meanwhile, both Rocky and Rouge manage to "overhear" people talking about how much the other person loves them, and they change their minds about each other. But as the wedding approaches, Brandy manages to sow chaos, doubt, and misunderstandings. He tells Blues that his sister has a different man under her window every night, and when Blues and the manager go to check, they see what they think is Pearl flirting with some man. Blues is crushed. Meanwhile, Brandy gets Rocky drunk, despite Rocky's protests, and somehow a completely soused Rocky manages to slug Mr. Palette and get fired. Brandy suggests he appeal to kind Pearl to intercede with their father, and then whispers to Rouge that perhaps Pearl is too concerned about Rocky...

The chaos continues, and gets more and more messy as everyone begins to suspect everyone else. At the wedding, Blues refuses to go through with it, and Pearl faints. Rocky comes up with a brilliant plan of pretending that Pearl is dead to see how everyone reacts, because he can't believe that she would do such a thing. Later, a jealous Rouge tells him that to prove he really loves her, he has to kill Blues. Well, in the end, he agrees to do it. Meanwhile, Rouge goes to talk with her sister, who is trying to decide how best to really kill herself, because she has nothing left to live for. Rouge convinces her to take something like poison (think R&J) so that everyone really does think she's dead and they can find out who's really involved with what. Brandy overhears their scheme, and again whispers to Rouge that Pearl might be involved with Rocky. Will Rouge give her sister the antidote in time?

It turns out, Rocky's hobby is boxing (haha), so he jumps into the ring with Blues. As they're fighting, first the maid comes sobbing that Rouge is really dead, and then Brandy's underlings finally confess the truth. Brandy helicopters in to throw suspicion on Rouge for Pearl's death, but when Rocky demands to know what's going on she simply laughs.

And then... Pearl bursts from her tomb and all is well. Misunderstandings become cleared up, the interrupted wedding is concluded, and Rocky and Rouge agree to be married as well. A happy end for all.