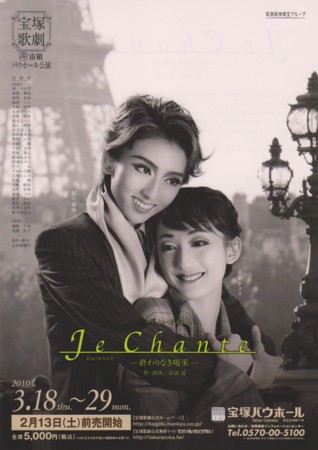 Paris, 1930. Charles Trénet is a young and eager worker in the props department at a movie studio. The current project is starring the famous Mistinguett, a woman who is the worst kind of diva. She's starting to show her years but insists on the nickname "Mis". She constantly overacts, adds her own choreography, deviates from the scripts and demands insignificant changes. The day before she declared that she didn't like the color of a chair she sat on, and Charles has to repaint it. Unfortunately, another overeager assistant brings it back to Mis before the paint has fully dried... When the actress sees the back of her shining white dress marred with a huge black spot, the ensuing uproar looks very bad for Charles until another of Mis's assistants arrives on the scene. Gigi has miraculously come back with a dress from an admirer of her mistress's, and the director and the rest of the crew use an overabundance of flattery to convince the diva to go off and change. Relieved, Charles thanks Gigi for saving him and admits that he's been nervous and made lots of mistakes. Gigi assures him that he'll be fine, but they have little time to exchange pleasantries before she's called away again by her "Mis".

That night Charles meets his friend Johnny Hess at The College Inn. Johnny notices that Charles seems really happy about something, but before he's able to find out what it is the manager of the club makes a disappointing announcement. The vocal duo The Miles Brothers, whom Johnny had specifically invited Charles to come and see, have had to cancel their performance for the evening. The inebriated customers at the next table start to cause a fuss, and as Charles tries to help one of them the man drunkenly suggests that Charles sing for them instead. Put on the spot, Charles uses the sounds of falling bottles and clinking glasses to create the song "Boum!" He and Johnny lead the rest of the people in the club in an impromptu song and dance.

The next morning Charles is hurrying home in the rain and runs into Gigi. She was sent out on an errand for Mistinguett and is also without an umbrella. The two take shelter under the awning of a nearby shop and chat. Despite Charles's sometimes silly and strange commentary, they begin to feel attracted to each other. The rain continues, and their conversation turns toward weather and the sea. Gigi says that the only time she saw the ocean it was dark and turbulent like the rainy sky. Charles replies that he should take her someday to his hometown of Narbonne, and sings a song about the beautiful, blue sea — "La Mer". When Gigi asks where the song is from, she's surprised to hear that Charles wrote it himself.

But they are once more interrupted by Mis, who arrives after worrying about Gigi being out in the rain. She is suspicious of her assistant "coincidentally" running into the props man from before, and when Charles goes to work the next day the director tells him he's no longer needed. Charles knows it's Mistinguett's doing but has no power to stand up to the formidable star.

Later as Johnny is consoling his friend, a man named Raoul Breton approaches them. He says he's from a music production company and was impressed by their performance; he happened to be at the club the other night. They laugh that their "performance" was merely a spur-of-the-moment stunt by two "understudies", but Raoul insists that their style of singing will lead a new era of music. Johnny convinces his friend that this is fate giving Charles the chance to realize his childhood dream of being a singer.

The duo "Charles et Johnny" is formed. They spend some time writing music together, but their first chance on a stage comes suddenly and without much preparation. Raoul is friends with Henri Varna, the owner of the Palace Theater, who calls them in to once again understudy... for Mistinguett. The star injured her ankle after some improvised choreography brought the curtain down on her, and a replacement is needed immediately. For their debut performance Charles and Johnny pass on the tuxedos set out for them and sing an upbeat and wacky number that seems more vaudevillian than anything else. Although the theater director fears that an audience expecting the great revue star Mis will not favor this kind of act, the crowd reacts with overwhelming applause.

Time passes. "Charles et Johnny" rise in popularity and create many famous songs together. But in 1936 Charles is drafted into the army, bringing an abrupt end to the duo.

While Charles puts on a good face and sings his way through military training, Gigi also faces a new path in life. Mis is forced to realize that she's past her prime — but rather than let the foreign sensation Josephine Baker steal the limelight, the actress opts to set up her own protégé at the Casino de Paris. Gigi is chosen to become the next big star, and despite the girl's reservations Mis immediately launches into talk of choosing a stage name for her.

In 1940 when Charles is released from the army, Raoul is ready and waiting to revive his musical career. He's already arranged for Charles to appear in a performance with the great revue star "Lise", who is now even more famous than Mistinguett. When they go to meet her after a show, Charles is shocked to see that Gigi has become a highly acclaimed and seemingly aloof stage actress. She also pauses in surprise, but denies knowing Charles and walks off when called away by her companion — the German Major Georg Steinel.

Charles is hurt and confused, but decides to try and meet Gigi again after her next show. First, however, Gigi finds Mis waiting in her dressing room. Although Gigi claims that she hasn't changed and is grateful to her mentor, Mis worries about her getting too close to a Nazi. Gigi retorts that with the German occupation this is the only way to keep her career; Georg has a lot of influence in the area of the performing arts. When Charles enters to speak with her, she runs out and he is left alone with Mistinguett. The incident from the past is long since forgiven, and she apologizes for separating him from Gigi all those years ago. She confesses to Charles that the young woman is more like an adopted daughter than an assistant — she knew Gigi's father and took the girl in after something happened to him.

Meanwhile, Gigi has already gone off to Georg's office. A song by Charles Trénet plays on the radio; Gigi speaks of his popularity, but the German is unimpressed. He dislikes Charles' style and sees no reason for "Lise" to perform with him. In fact, he wants to take her to Berlin to appear in an "advertisement" film for the Nazis. However, she is against the idea of being part of Nazi propaganda and vows to stay on the stage "as long as there's even one person left in Paris".

The people of Paris are suffering under the crushing hand of the Germans, but they continue to flock to the theaters in search of a momentary escape. Charles performs with "Lise", and when they dance together he can see the conflict in her eyes. Georg, in the audience, sees it as well. After the show he has his lieutenant Philipp escort Gigi back to his office. He announces that she is forbidden to perform with Charles again, and that he's received permission to take her to Berlin. It's not an offer, but an order — yet Gigi declares that she's not a slave to the Nazis and runs out.

Soldiers charge through the streets in search of her, but in the midst of the commotion Gigi has the good fortune to run into Charles again. She says that the Nazis are after her and he takes her back to his home, no questions asked.

She reveals her past him: her father was a Russian playwright who emigrated to Paris and ended up training the aspiring star Mistinguett. But one day without warning a group of men took him away, and she never saw him again. It was a pogrom targeting people of Jewish heritage. Gigi confirms that she is Jewish as well, but escaped notice by posing as Mis's assistant and using her mother's maiden name. She laments how much she has changed; how low she has sunk to keep her livelihood. But Charles assures her that she hasn't changed, the times have. Someday this, too, will pass... but for now she should flee the country. The Nazis don't have power in Southern France yet; she can escape to Narbonne and get out that way. Charles vows to pull any connections he can in order to help her. Henri lets them use a secret underground room in the Casino de Paris to hide her in, and when the time is right she'll be smuggled out and away.

On the stage itself Charles performs "Douce France", aware that the Germans are watching him closely. He hopes that they'll be too busy listening for any lyrics protesting the occupation to notice Gigi's escape. It seems to be just a song about his beloved homeland, but when people rise and begin singing with Charles, Nazi soldiers rush in to stop the performance.

In the basement Gigi, Mis, Henri, Johnny and his girlfriend Nina are listening worriedly to the sounds of commotion and gunfire above. Charles arrives and insists that they still have a chance to get Gigi out amidst the confusion. But as they head toward the door Georg appears, having been led there by another of Mistinguett's less faithful assistants. The Nazi major only wants Gigi, but Charles stands protectively in front of her. Georg reveals that he knows Gigi is Jewish but promises to keep her secret, if only she'll come with him. She stands strong, asserting that she no longer has any secrets and will be herself wherever she goes. In response Georg pulls his gun and points it at Charles, vowing to silence the singer forever. But as he pulls the trigger Gigi throws herself in front of Charles, taking the bullet. Charles cradles her in his arms as Georg falls to his knees in shock. When more soldiers arrive at the door, the major tells them no one is there — Lise escaped through a secret exit, and they should begin searching the city for her. He stumbles out and Charles is left alone with the dying Gigi. With her last breath she sings "La Mer" and he joins her, promising to take her to the sea. She says she believes they'll be together there someday, and then is gone.

Losing his love causes Charles to lose direction in his life and he departs to America, leaving his memories in Paris behind him. But the voices of old friends eventually call him home, and he returns to France to continue making beautiful music.