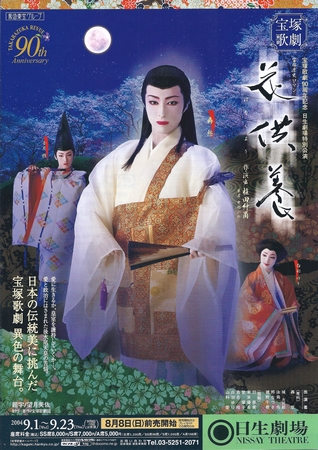 Placed at the beginning of the Edo period, the story of the play tells about a love drama between members of the emperor family, who suffered by the pressure of the Tokugawa Shogunate.

Year of Genna 6, June.
At the day when Emperor Gomizuâ€™s and the second shogun Hidetada Tokugawa's seventh daugther Kazuko (also called Masako)'s marriage ceremony that spectacularly took place, in the residence of the Konoe of Kagamo family one woman's tears were quietly shed.

To establish a peaceful shogunate under their reign as shoguns, the Tokugawa family who destroyed the Toyotomi family during the 'Osaka Summer' refused the crown prince, who was recommended by Hideyoshi, the throne, and recommended the third prince Kotohito to become the next emperor of Japan.

So, after the current Emperor Youzei abdicted resigned by the pressure of the Tokugawa, Crown Prince Nagahito went into priesthood and Prince Kotohito was enthroned as Emperor Gomizu.
Emperor Youzei's bitterness, that not his favour successor and own younger Brother inherited the throne, was so deep, that Prince Kotohito was never again permitted to face him.

Isolated in the coldness of the Imperial Palace, Emperor Gomizu speaks only to Konoe Nobuhiro, his younger brother who had been adopted by the Konoe family, about the deep love feels for Lady O-Yotsu, a princess from the family of chief councilor Yotsutsuji.

By the hand of the shogunate limits the privileges of the imperial court, Lady O-Yotsu, who even gave birth to two of his children, is banned from the imperal court to introduce the second shogun's daugther Masako, who is now called Kazuko, to the court instead. She isn't able to return home, so she is secretly hidden in the residence of the Konoe family because of the goodwill of Konoe Nobuhiro.

Emperor Gomizu accepted Masako's introduction to the court, and ignoring the day by day increasing interference of the shogunate, he comes to the Konoe residence often to meet Lady O-Yotsu secretly.

But then Kasugano Tsubone, who is a powerful woman at the court, enters the residence of the Konoe residence and his purpose is a cross examination concerning the weak leadership of Emperor Gomizu...