Loading...
Burning in Firenze / Fashionable Empire
READ THIS BEFORE EDITING THIS PAGE 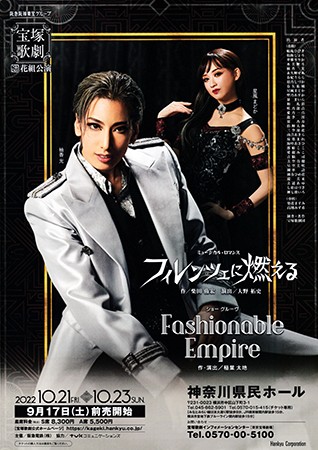 The setting is Firenze (Florence), Italy, in the 1850s, where the Unification of Italy was beginning. Antonio is a sharp and virtuous young noble who is the oldest son of a marquis family. He meets Pamela, who used to be a singer at a bar but has now become the widow of a noble. He is charmed by her eyes that are deep with emotion and falls in love with her. On the other hand, the second son of the marquis family, Leonardo, is more free-spirited than Antonio. He believes that Pamela is a wicked woman who will lead his older brother to ruin. He therefore sets up a false romance to separate them, however...

"Burning in Firenze" was first performed by Snow Troupe in 1975 and was highly acclaimed during its time. Flower Troupe, led by Yuzuka Rei, will tackle the first restage of this musical overflowing with pathos that depicts the theme of the dichotomy of love.

A revue that transforms the stage into the "Empire" where the pioneering fashionistas of our time gather. The stylish array of scenes will enchant the audience, at times with the cool atmosphere, and at times with the hot beats. While focusing on the sophisticated and metropolitan appeal of top star Yuzuka Rei, this revue also shows off the unique, scintillating members of Flower Troupe through many groovy scenes.