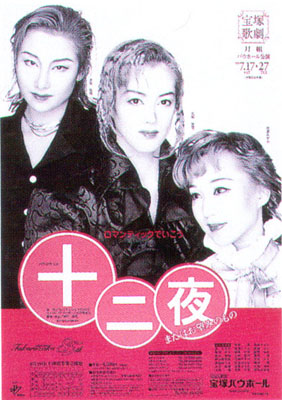 Viola is a girl shipwrecked in the Dukedom of Illyria. She takes on a male disguise and the name Cesario and becomes a servant of Duke Orsino. Although she falls in love with him, the duke is in love with the Countess Olivia, and sends Cesario (Viola) as his messenger to try to win her over. Olivia mocks the duke's message, and Viola chastens her for her behavior. Olivia falls in love with this young messenger who speaks so passionately about love.

Meanwhile, Viola's twin brother Sebastian also survived the shipwreck. He is given guidance and money by Antonio, but Antonio will not go into Illyria because he is wanted by the Duke.

Subplots involve Olivia's household, where her cousin Sir Toby attempts to convince poor, foolish Sir Andrew that he has a chance to win Olivia over. Also, Sir Toby, Feste, and Maria band together to pull pranks on the steward, Malvolio, who is very conceited and in love with Olivia.

In the end, there is a complete chaos of mistaken identities, fights, and duels.