Loading...
The Tale of Tatsu-no-miya
READ THIS BEFORE EDITING THIS PAGE 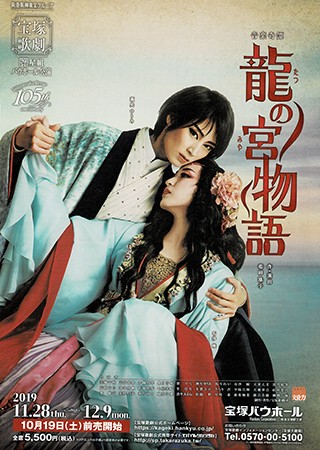 Long, long ago, a lake called Yasha-ga-ike dried up. The village headman sacrificed his daughter to the dragon god who dwelt in the lake, and the rains returned to the village....

In the middle Meiji Period, Iyobe Kiyohiko, a student under the tutelage of the businessman Shimamura, is telling ghost stories with his friends when the tale of Yasha-ga-ike is told. Kiyohiko then sets out for the lake to put his courage to the test, when he encounters a girl being set upon by brigands. When Kiyohiko saves the girl, she brings him to the dragon god's castle (Tatsu-no-miya) at the bottom of the pond as a thank you. The girl Kiyohiko had rescued was the dragon god princess Tama-hime. For saving the princess, Kiyohiko is
owed a great deal and is treated courteously; while living a life of pomp and splendor in the palace, he is charmed by the princess's bewitching beauty. After many days pass, Kiyohiko informs the princess that he wishes to return to the surface, to his friends and to the young lady Yuriko of the Shimamura family whom he was in love with. When he returns to the surface, he discovers that during his few days in Tatsu-no-miya, 30 years passed by in the world above...

After 105 years, Takarazuka returns to the tale of the youth and the dragon princess which was originally told in "Urashima Tarou."