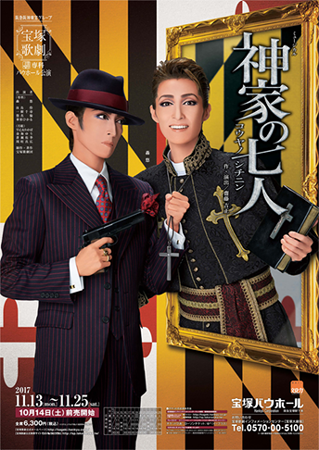 A Senka Bow Hall performance centered around the skillful performers of Senka. They have done Neil Simon dramas and Greek tragedies, but this time it will be an original musical comedy.

September, 1945. Ivan Turner who fought bravely on the front lines of Europe as a soldier for his homeland in WWII, returns home to Baltimore. Although he had weathered so many risks to his life, there is one more tragedy awaiting him when he returns home: His father has died. Shortly after returning, Ivan is forced to take up the reigns as director of "Turners Corporation," the company founded by his father, but the truth of the company he has inherited is that it was the vehicle for the mafia to take root in Baltimore. Ivan is too kindhearted to ignore people who are in trouble, and so he says that he will break up the company and become a novice priest. Ivan's father had requested that the six executive members of the company look after his son, and so they follow him and out of necessity also travel along the "Path of God" .....