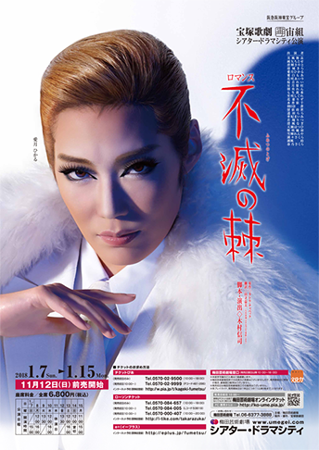 Note: This play is based on “The Makropulos Case”, written by the famous Czech writer Karel Čapek (and currently a well-known opera). The following synopsis was made possible by the Metropolitan Opera’s synopsis, and by the wonderful Sharon from the Takarazuka Mailing List, who posted a summary with some of the details of the longer dialogue. As usual, Takarazuka has added their own spin to the original story; the most notable change in this play is that the genders of most of the major characters have been reversed. (In the original play, the main character is a woman.)

In the first scene of this play, Eri's father is murdered, ostensibly for the elixir he has invented that grants immortality. Eri appears, reading a letter that his father has written to him explaining that he was the test subject for the elixir, and is now immortal. Eri is unhappy about this, as he feels it means he is no longer human.

The stage fills with people celebrating the new year — presumably the turn of the century, as Eri is dressed in 18th-century clothing and they all are wearing styles from the 19th century. When the dancing people leave, Eri has a brief conversation with a boy dressed as a jester, something about the lady Frida Pulos. When the jester exits, Eri gives his wallet to a beggar on the street. The beggar stands up and reveals herself to be Frida. Frida and Eri have an intense conversation, where Frida insists that she loves Eri but he tells her that he is cursed. It is evident that he is in love with her as well, however. Their dialogue ends in a kiss, but then Frida runs offstage, and suddenly the stage is again filled with people celebrating the new year... and another 100 years has passed, judging by their 20th century clothing.

The next scene is set in a lawyer's office. Eri is currently known as Errol Maxwell, a very popular stage performer, and apparently he is the star client for this attorney (there's an enormous portrait of his face on the back wall.) A young woman named Frida Muha (bearing an exact resemblance to the woman in the first scene) enters and talks with Albert, a clerk, and Kolenaty, the lawyer. She is actually a descendant of Eri and the Frida of the first scene, who had a child together.

Suddenly Errol Maxwell himself shows up (complete with a set of backup-dancing-girls whose sole purpose seems to be to hang on his every word). There is a very long scene of dialogue and song. Frida is immediately enamored of Errol, who completely ignores her. Though Errol's love Frida had passed away about 100 years ago, her estate had been passed down to some distant relatives (Hans and Kristina) rather than to the young Frida Muha. He wants to obtain a will and some important documents from that estate. Errol asks Albert and Kolenaty to help him steal the will from the estate that night. Albert is a bit jealous because he is in love with Frida, whose attention is completely fastened on Errol.

The estate in question currently belongs to Tatiana, Hans and Kristina's mother. Kristina is sitting at home sewing and singing happily when suddenly her brother Hans comes into the house, very drunk. He starts waving a revolver around and points it at his own head. She talks him into giving her the gun. Tatiana appears, disturbed by the noise, and she and Hans argue before he storms out. Errol breaks into the house through a window, and he speaks to Kristina and her mother, seeming to want something from them. Kristina is both afraid of him and charmed by him, and in her uncertainty she accidentally shoots him with the gun she took from her brother. He leaves through the same window. Kristina is terrified, thinking that she's killed someone.

Tatiana, Kristina, Albert, Kolenaty and Frida go to Errol's concert the next day. He performs dressed as a woman, and using a very girly voice! But then wipes off the makeup to reveal he is a man. He doesn't seem to be hurt at all by the shooting the night before.

Backstage, there is a brief scene with the stage hands before Kristina comes on asking for Errol. He turns around in a chair. He and Kristina talk for a bit, then Tatiana interrupts and gives Errol some flowers. Frida, Kolenaty and Albert also show up and they all talk together. Errol is cold to all of them, including Frida who insists to Errol that she is in love with him. An old woman suddenly appears, and speaks to Errol. She is the only one that Errol shows kindness to... in fact, he dances with her and gives her a kiss, much to the shock and disgust of the others present. When everyone but Albert leaves the stage, Errol sits down wearily and speaks of Frida (his first love, though Albert doesn't know that.)

The next scene takes place on a bridge, where Hans comes stumbling in and passes out on the road. Errol approaches Kristina and they talk for a while; he wants the will from her and offers to pay her for it. Kristina has a big crush on Errol at this point, and says she will give Errol the will if he will marry her. He agrees, but Tachiana interrupts and sends Kristina away. She apparently tells Errol that only she can get the will for him, and she will give it to him only if he sleeps with her. So he agrees, and walks off with her. Kristina watches them go, heartbroken. She writes a note, leaving it in her purse on the ground, and then jumps off the bridge. Hans comes out of his drunken stupor enough to recover the bag, and figure out what just happened.

At Errol's hotel the next morning, Tatiana gives Errol the will and papers he wants, but she is disappointed in his coldness as a lover. The doorbell rings and Hans enters, giving his mother Kristina's suicide note. He is furious with her, blaming her for Kristina's death. Tatiana is shocked and devastated. Errol doesn't seem to care much when he finds out, which angers Tatiana.

Suddenly the hotel room is full of people, including Frida, Albert, Kolenaty and the old woman from the theater. A party ensues, complete with quite a bit of drinking and noise. Albert calls everything to a halt and accuses Errol angrily of being a fake, or hiding something from them, as there is something very suspicious about his actions and his relationships with the other characters.

Errol finally admits the truth. His real name is Eri Makropulos. He is over 300 years old, thanks to his father's eternal life elixir. He shows how his handwriting matches the handwriting on a letter he wrote to the old woman 50 years ago, as proof. Everyone is still skeptical, so he pulls out a gun and shoots himself with it... but does not die. He explains that that the documents he wanted from Frida's estate actually contain the recipe for the eternal life elixir, which his father had tested on him when he was young without his knowledge or permission. He and Frida had a child, who is Frida Muha's ancestor; that makes him the young Frida's grandfather by several generations.

He explains that life has lost its joy and meaning, and that living forever has taken away his humanity. He offers the elixir to anyone in the room who wants it. Only the young Frida takes it... and throws it into the fireplace where it is burned to ashes. This apparently releases Errol from his "curse"; he says goodbye and turns into ashes himself.