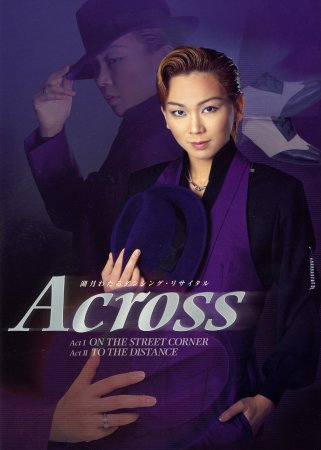 (This summary is based on the dvd not the official english show synopsis. The list of music and scene titles are from tca-pictures.net)

Act One: On the Street Corner
This act loosely tells a story of Boy meets Girl in a street gang setting. It features Kozuki Wataru as the leader of the "boys" and Hizuki Hana as the Girl.

Synopsis:
Man in trench coat (Wataru) sings a song while the boy gang gathers and dances at the street corner. The man leaves and the leader of the gang (Wataru) joins the rest of the boys. (Music: 壊れかけのRADIO)

The girls joins the boys and with a bit of help from the rest of the boys, the Boy/Wataru tries to impress the Girl/Hana with his dance moves. (Music: どんなときも。)

The gang leaves and Boy/Wataru is left to do a solo dance. (Music: 少年時代)

Boy/Wataru leaves and the rest of the gang shows up one by one, illustrating different activities (playing ball, driving, playing guitar etc). (Music: 太陽と埃の中で)

The girls take over and do a slow dance number. (Music: フィーリング)

The boys again, they do a dance with Wataru as lead dancer doing lots of macho posing. (Music: 冬の稲妻)

A continuation of the previous number but more vocals and less dancing from Wataru. The boys leave and on the way out Boy/Wataru runs in to Girl/Hana but is too busy to stay with her. Girl/Hana gets angry and... (Music: RUNNER)

sings and dances about it. Lead dance and lead vocals by Girl/Hana, with the other girls as back up. (Music: GET CRAZY！)

Pair dances by assorted couples including Boy/Girl. In the end Boy gets too busy posing and Girl decides to leave. Boy gets frustrated. (Music: MOONLIGHT BLUES)

The boys arrive now in suits and ties, they are followed by the girls. Boy arrives and Girl is/gets interested but is obviously with someone else, as is Boy. Group dance number. (Music: 君がいるだけで)

Girl walks around and is pursued by different boys whom she rejects. The scene turns into a group dance number. (Solo vocals by Hana with back up by the other girls) (Music: ムーンライト ダンス)

Boy decides to run looking for Girl, who is doing the same thing. Rest of the troupe performs dance number. Finally Boy and Girls paths crosses and Boy finally stops posing and gets Girl. (Music: ラブ・ストーリーは突然に)

Closing number for part one. Lead vocals by Wataru. (Music: FOREVER MINE)

Act Two: To the distance
This act is more of a revue set up without a story and combining several songs in to each scene.

Scene One: (始めに踊ってみる)
Music:
Across組曲
(There seems to be some songs missing from the song listing taken from tca-pictures.net. The dvd booklet lists seven different songs for this number.)

The scene starts out with bits of the theme song Across performed by Kozuki Wataru. The scene then changes into a rock number. The scene closes with Wataru alone, in cowboy outfit, singing Across.

One musumeyaku and four otokoyaku performs to the Pink Panter theme. Then Wataru returns and sings "Softly. As In A Morning Sunrise" while walking around in the audience. The rest of the number features Wataru doing short pair dances with the musumeyaku and also a couple of otokoyaku in dresses.

This scene starts out as a blues number with Wataru and a chair. Then the other otokoyaku joins in a more large scale dance number. They are then joined by the musumeyaku and several different dance numbers are performed by the ensemble, including an otokoyaku black tails line up as the closing number.

This scene starts with Wataru singing the theme song from Gone with the wind. Then follows a pair dance between Wataru and Ayaka Rei (as onnayaku) and a short ensemble dance before the section closes with Wataru in costume as Rudolph singing Utakata no Koi.

A latin dance number with Wataru as toreador and initially music by Grieg(!). It eventually turns into a short pair dance with Hizuki Hana.

More Latin with parts of the ensemble getting small solo/pair numbers. this is followed by Wataru in a Latin number and interacting with the audience . The number closes with the ensemble doing a miniature line dance.

Scene Seven: (歌ってみる)
Music:
Story
エンドロール
Across
You Are My Sunshine

Wataru sings "Story" followed by a dance number. Then the ensemble does their bow to the instrumental introduction to Across before Wataru returns for her bow. This is followed by another walk in the audience.

An encore with Wataru singing. This is followed by Wataru calling out the entire ensemble to make each of them do their own personal presentation of themselves.