Loading...
Written by nazon. The original text is available here.


There are two types of forms of iri-demachi (watching when the players enter or leave the stage door), and there are implicit rules to them.

Basically, it is that
gallery goes after guard.

Guard is that there are people who wear the same clothes and accessories called club wear, and are moreover all club members; they all line up in an orderly manner according to the instructions of fanclub staff.

Although there are a lot of strict things for guard, it’s basically
- wearing club wear
- kneeling when a seito passes through (even if it’s not the seito you support)
- not being able to leave until all of the troupe’s fan clubs have dispersed (you cannot leave even if it rains and you haven’t prepared rain gear)
- prohibition against photo-taking
as a complete group action. And since it’s a group action, it is likely you are now reluctant to do guard.
The privileges are,
- since you line up in the front row, you can observe the seito more closely
- you can deliver letters personally (although there are times that you can’t)
- basically the seito is courteous towards her fanclub members, and there are a lot of chances to look forward to receiving a smile (although that depends on the seito... there are unfriendly people too)
- at events, there is also a chance to receive a present personally from the seito.

As for gallery, which is for fans who do iri-demachi outside of guard, you are free to leave at a different time from guard (you can go home if the seito you support goes home), and you can take photos.

However, although you can see the seito from behind the guard, you can’t do iri-demachi except from that poor vantage point.

Also, only fanclub members are informed of iri-demachi times.

When you are not in a fanclub and want to do iri-demachi, you can get ready usually about two and a half to three hours before the start of a performance, or wait when there are a lot of people in guard in place for demachi after a performance.

Depending on the situation if a seito goes to do a job, she may go in earlier than usual in the morning or leave later. Even saying so is something that only a fanclub member will know, and you may go on waiting only to be disappointed.

Where the fanclub members line up is different depending on the day of the week; gallery people can make an educated guess and know as the days go by which club wear is for which seito’s fanclub, and look for the people in guard for which fanclub is where.
Then, let me explain guard in each theater and the position of the gallery below in my poorly done picture. 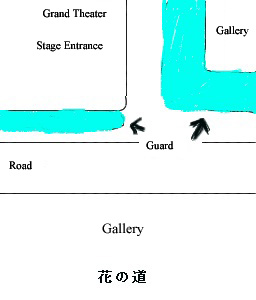 I’m sorry for the horribleness...

The blue-colored part is the position of the guard. At the Grand Theater, while the gallery is behind the guard in front of the stage door entrance, there are a lot of people on the “Hana no Michi.” This is a map of waiting places for seito whose troupes are in performance; “rehearsal iri-demachi” is in a different place.

Next is the Tokyo Takarazuka Theater.

Iri-demachi is done on both sides, alongside the Hibiya Chanter and on the sidewalk of the theater. In the diagram below, the positional relationship is for when the left-hand side is Chanter/the theater and the right is the seito.

This is the basic way, with gallery behind guard. It’s easy to understand.

Please note that whether the seito’s fanclub lines up on the Chanter side or the theater side depends on the day of the week.

Although I explained it crudely, perhaps that was of assistance?

As for guard, since the restriction of “you can’t go home freely” and coping with the rain is difficult, I recommend that you start by seeing the situation from gallery and getting a grip on the basic feeling, and starting guard on a day when there’s time and space and the experience is clear to you.

If there is a person close to you who has already experienced guard, it might also be good to hear their know-how.

Well then, to a fun Takarazuka life!