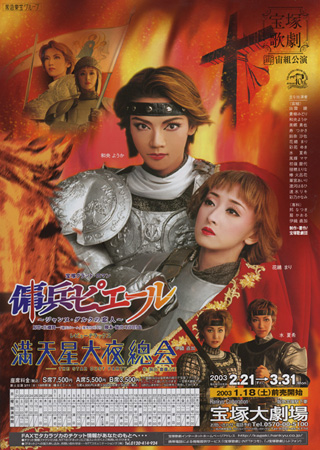 In the fifteenth century, France is divided and the prestige of the French monarchy is gone because of the Hundred Years War. France is defending itself against an English invasion while suffering from the state of civil war. People are spending their days in fear and despair in a chaotic France filled with violence.

Pierre, Commander of a band of mercenaries representing itself as the Unicorn of Anjou, is originally a noble and the illegitimate son of Armand de la Foulte, an illustrious chevalier in the French kingdom. Pierre loses sight of his father when ten years old in the midst of a battle against English forces. He is saved by Hugues, then the captain of mercenaries, and brought up by his followers. Pierre, after having grown up, kills Hugues in an incident, and then becomes captain of the mercenaries. He is given the nickname Pierre the Chief-Killer and is trusted by all of them.

When there is no war, mercenaries have no income and people coldly look down on them taking them as rough fellows. In fact, they often become robbers. One day, on a snowfield in Lorraine, Pierre and his company fall on a party of travelers including a beautiful girl disguised as a young man. Pierre winces at the mysterious light emitting from the girl's innocent eyes. She tells him that she is a messenger of God wishing to save France and that France would suffer a crushing defeat if she were to be deflowered and killed. She promises that she will give him her maidenhood once Prince Charles is crowned at Reims and France is liberated. Pierre sets her and her company free in spite of himself. Pierre has no idea at this moment that she is none other than Joan of Arc, La Pucelle (the Maid) rumored all over France to be a girl sent by God.

Pierre remains surprised at his having easily set Joan and her company free after listening to her. Since then, she is ever present in his mind. Pierre's immediate followers such as Thomas and Robert are alarmed, for Pierre is somewhat strange in his behavior. They bring in a woman from a town and ask her to entertain him. Pierre realizes the cruelty of war seeing the thin and weak woman with frightened eyes, and remembers Joan's words that she should go to the front in order to save France. He gives the woman a ring and tells her to buy something to eat with the ring.

On the day of the inspection of troops in Orleans, Pierre and his followers meet with La Hire, a famous battalion commander. La Hire tells him that the savior of the French army will make a speech the next day. Pierre at last comes to know that the girl he met in Lorraine is Joan of Arc, the savior of the country. He invites her to the billet of the mercenaries. The mercenaries are all puzzled by the speech and behavior of Joan who is indeed pure and innocent in heart. Pierre sees in her, holiness as well as loneliness, and feels a pure and tender feeling growing inside him.

The day of the decisive battle against the English forces at the Fort of Saint Leu arrives. While Pierre and his company are making elaborate arrangements, Joan rides her white horse along with a troop of soldiers to the enemy. Pierre and his company hurriedly catch up with Joan in order to guard her. Her bravery raises the morale of all the soldiers, drives out the English forces and brings France victory.

Pierre nurses injured Joan with the utmost care. She asks him to cut her hair short in order to wipe out her growing inclination for Pierre. With a heavy heart, he cuts her hair with his dagger.

Joan is successful in crowning Charles VII in Reims. People sing the praises of Joan as a saint even louder. However, she cannot hear God anymore. Her mission is over. Pierre leaves for Alainville where he is appointed captain of the guards whilst he is still concerned about Joan.

Act 1 : Open the Gate
An innocent young man shows up on the front bridge and sings his longing for big cities such as Shanghai and Hong Kong.


Act 3 : Soaring Like Singing While Dancing
A flashy cabaret appears with a stage inspiring the Forbidden City.


Act 4 : Graceful Time in Space
Dragon S navigates through the gay and sensual night world of cabaret while singing and dancing with pandas.


Act 5-6 : Screen Star in the Street
Hanachang is a young girl living by regularly pocket-picking in lively Kowloon, Hong Kong. There is a movie star she adores. One day, she attr Acts the attention of scouts.


Act 16-17 : A Fairy Tale of Stars
A girl on a star is about to be caught by scorpions in a desert. A young man on the star hears her song crying for help. He moves toward her, and fights the scorpions to save her.


Act 18-19 : A Tragic Love in a Foreign Country
Joe, a member of allied forces, returned home to a port town in China to see his former girlfriend.


Act 20 : A Legend of White Wing
A white-winged man S sings and dances in the bare hope of communicating. Then many white-winged persons fly down. Previous lovers change into White Wings S and dances as though he wants to fly into the sky.


Act 21 A : Coquettish Schemes A
Three couples announce the beginning of the finale with a cheerful song.


Act 21 B : Coquettish Schemes B
A couple of stars dreamily sing in duet.


Act 23 B : Coquettish Schemes E
A couple of top stars dances in duet to parting songs.


Act 24 : Parade
-THE STAR DUST PARTY-
A gorgeous parade of the revue rolls out.