Loading...
Outen no Mon / Deep Sea
READ THIS BEFORE EDITING THIS PAGE 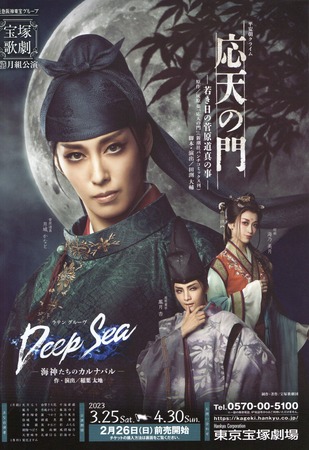 
Outen no Mon -The Tale of Young Sugawara no Michizane-

“OHTEN NO MON,” an ongoing series from Monthly Comic Bunch by Yak Haibara, is a historical tale of suspense detailing the adventures of Sugawara no Michizane, who was revered as the god of learning, and legendary Heian playboy Ariwara no Narihira as they team up to solve bizarre incidents in the ancient capital. This series, which has garnered high praise as a historical manga, winning the 2017 Japan Media Arts Festival Manga Division New Face Award, will be adapted for the stage with a unique Takarazuka Revue flavor.

During the early Heian period, Fujiwara no Yoshifusa and his adopted heir Mototsune maintained control over the Imperial Court. Mysterious incidents frequently occurred in ancient Kyoto where a procession of demons would strut through the streets monthly on the day of the Rat, killing anyone who saw them. By chance, Sugawara no Michizane becomes acquainted with Ariwara no Narihira, the head of the police and judicial chief. Recognizing Michizane’s talents, who from a young age was a brilliant and renowned scholar, Narihira asks for his help in solving the mystery. Thanks to the cooperation of Shoki, an obstinate female shopkeeper who deals in Tang Dynasty goods, Michizane gradually draws closer to solving the mystery. In the background, however, swirls the greed of secretive powerful figures who mask their intrigues as the deeds of demons and specters...

Deep Sea -The Carnival of the Sea Gods-

Deep at the bottom of the sea, warmed by the heat of the Earth’s mantle is where the curtain opens on the sea gods’ carnival! The sea gods gather at a temple on the ocean floor to host a passionate carnival showcasing the beauty of the deep-sea, an unrivaled spectacle. This Latin show, replete with the charm of Moon Troupe members led by Kanato Tsukishiro, delivers an alluring performance filled with passionate rhythms.