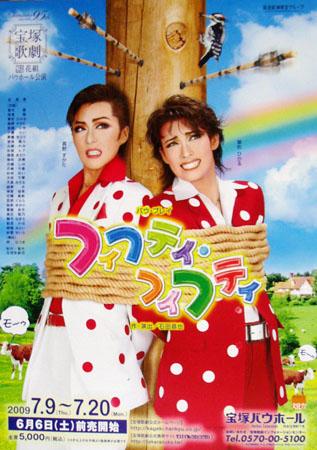 
Available on DVD: No

Jonathan and Victor are two best friends who grew up in an orphanage together. Now as adults they both make their livings deceiving people — Victor as a gigolo, and Jonathan as a real estate consultant who takes a generous sum out of customers' transactions. Thanks to their "good friend" Morris the gangster they get caught up in a homicide and, having never dealt with anything so serious before, flee the scene of the crime.

Meanwhile, in the small village of Benson, residents are worried that the young people keep leaving for the big cities and no one's getting married to produce the next generation. Kirk, one such young person seeking his fortune, becomes a highway patrol officer. Having been given grief from his elders for leaving town, when he comes upon the two fugitives on the road he coerces them into going to Benson.

There Jonathan is reunited with his childhood friend Clara and is made to work as a farmhand under her grandmother Helen. Victor does an amusing turn as a parson and, though he's made his life on empty relationships up until now, starts to develop genuine affection for the world-weary bar owner Pamela. In the village the two men discover their true selves and feel their hearts begin to change... as they change the lives of the people around them as well.