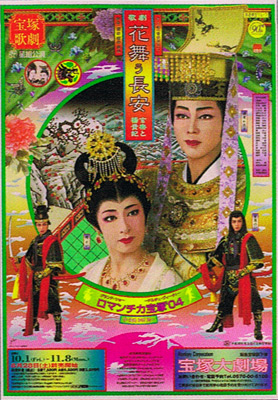 
WARNING!! MAY CONTAIN SPOILERS!!
CH'ANG-AN, FULL OF SWIRLING FLOWERS
One autumn evening, Emperor Hsan Tsung is thinking back to the dreamy past and gone days when he was together with Yang Kuei-fei, a woman equal to the prettiest flower in Ch'ang-an. Just before he falls asleep, a mountain hermit to whom all things are believed to be possible appears before him. Hsan Tsung asks the hermit to make him see Yang Kuei-fei (Y-huan) once more.

Hsan Tsung comes to the throne as the sixth emperor of the T'ang dynasty. Soldiers and people gather and shout to celebrate the birth of the new emperor. He works hard for the prosperity of the country by appointing men of ability, expanding the economy and strengthening the army. During his peaceful era called Ki Yuang, he is successful in building a prosperous nation.

Several years later, Hsan Tsung is overcome with grief with the death of his beloved consort Wu Hui-fei. General An Lu-shan and chief eunuch Kao Li-shih tells him that at Prince Shou's, there is a fair girl who is a replica of Wu Hui-fei. Thus, he calls upon the prince's palace and immediately loses his heart to the beauty of Y-huan who is dancing like a pretty flower. Although he knows that she is betrothed to Prince Shou, he cannot help but force her to come home with him. He orders Kao Li-shih to make her a consort of the emperor. Then, on the occasion of a celebration which takes place at the Hsing-ch'ing Palace, he declares Y-huan to be his precious consort and to be called Yang Kuei-fei. While Yang Kuei-fei is in Hsan Tsung's complete favor, her cousin Yang Cheng receives the name Yang Kuo-chung from the emperor and increases his influence by making profit from the emperor's fancy for Yang Kuei-fei.

Hsan Tsung finds his life constrained by so many rules and conventions and begins to neglect such important duties as imperial audiences with foreign ambassadors. When he whines that he wants to live freely just like the populace, Yang Kuei-fei tenderly consoles him. He confesses his passion for her. Yang Kuei-fei is as happy as happy can be deeply loved by Hsan Tsung. One day when she goes to a garden in the palace to see tree-peonies, Mei-fei, one of Hsan Tsung's consorts, prevents her from entering the peony garden. Mei-fei states that upon her request, the emperor had officially ordered that the garden be kept closed until Li Po is invited there to make poems. Intense jealousy fills Yang Kuei-fei's heart at the knowledge that Hsan Tsung frequents Mei-fei these days. When he comes and sees her late that night, she demands he give her Mei-fei's mansion, ume-apricot orchard and ladies-in-waiting. He replies that he is willing to give her even Mei-fei's life if she should ask for it. She at last confesses that what she truly wants is his heart which had been given to Mei-fei. Now that he knows her true feelings, he assures her by saying that the only one he really loves is her. As a token of his love, he offers her a hair ornament which he had a craftsman make especially for her.

An Lu-shan visits Yang Kuei-fei and tells her that because he is in love with her, he has done his best to gain his high position in spite of his being of mixed Sogdian and Turkic origins. When he tries to embrace her by force, she beats him back with a branch. He then tells her that his soldiers at the frontier would raid the capital city Ch'ang-an if given an order by him. He continues by saying that the emperor smitten by her charms has wasted the money in the treasury so that the people wish ill of the Yangs and will kill the Yangs once a rebellion takes place. And he leads her into giving herself to him suggesting that she would survive only if she goes to Fan Yang with him. However, she rejects him and cries out for help. Hsan Tsung rushes in with his courtiers and tightly embraces her. He tells her that he admires her noble character for repelling An Lu-shan and that he is very much delighted at having found the best consort in the world. She replies that she wants nothing but a peaceful life with him. He makes a vow of everlasting love to her. However, some time later, An Lu-shan determined to revolt against Hsan Tsung agitates the people and raids Ch'ang-an, leading a total of a hundred and fifty thousand soldiers.