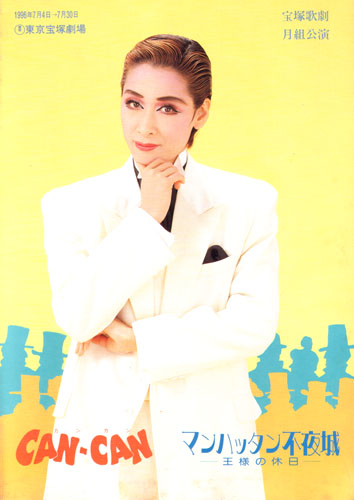 Things change when Forestier, a new judge, gets appointed and comes to town. He is very serious and orders a raid on the Bal du Paris, arresting all the dancers. Pistache tells the police that Victor is the owner and escapes getting arrested. All the dancers are charged and put on trial. However, no police officers come forward to testify, because they are all bought off. In addition, Victor argues very well in the trial and gets all of the dancers acquitted for lack of evidence.

Forestier is very irritated and decides to go to Bal du Paradis himself. Pistache does not know who Forestier is, but notices that he has an in-depth knowledge of the law. She wants to use him as a partner. However, an employee tells her that Forestier is the one who prosecuted the dance hall. Both are drawn to each other, even though both realize they are enemies. Still, Forestier is too loyal to his job and tells the police officers to arrest Pastiche as soon as the Can-Can starts.

Forestier visits the detention cell to visit Pastiche. He apologizes and tells her that he did not mean to arrest her and releases her. Pistache demands to re-open the Bal du Paradis, but Forestier cannot allow it as a judge. Pistache tells him that she is going to do things her own way and leaves him. Forestier, who is left alone, notices that he has fallen in love with Pastiche.

Later, Victor sets up an artists' ball at Bal du Paradis. It is a trap for Judge Forestier. Not knowing Victor's intention, Forestier gets up on stage to protect Pistache. Then, Victor introduces Forestier as the host of the ball. The next morning, people see a picture of Judge Forestier with the Can-Can dancers in the newspaper. The police come after him.

Artists help Forestier and protect him. He opens his mind to their way of living. When he is punished for supporting the dance hall, he decides to fight back in order to see that justice is served.

Soon, Forestier and Pastiche become partners and start a new laundry business at Bal du Paradis. They operate a laundry during the day to be legal, but at night it becomes a Can-Can dance hall. However, the police learn about it and arrest Forestier. This is a part of his plan, for he wants to stand up in court.

During the trial Pistache comes forward and claims that she is the one responsible. A judge and jury agree to see Can-Can firsthand and then take a vote at the dance hall.

At Bal du Paradis, Forestier, Pistache, Victor, and all the dancers present the Can-Can and make a plea for its wonderful entertainment. The jury votes and agrees that the Can-Can dance is a fun attraction and they demand the laws regulating this wonderful dance be reviewed. Therefore, Can-Can dance becomes legal. At the same time, Judge Forestier restores his reputation. Forestier and Pistache hug each other with joy.

The fog lifts and a meieval castle appears. The castle has just woken from a long sleep. In it, King Luna stands like a ghost. Suddenly, the stage setting changes to present-day Times Square, New York. King Luna and Queen Estrella are brought to life. They are amazed at the hustle and bustle of Manhattan and walk around the city with great interest.

Daytime in Manhattan. A group of strange fortune-tellers appear. Their leader, Rockenfellow, predicts a medeival castle will be built in Manhattan. New York Mayor Lincane disclaims his prediction. New Yorkers agree with the mayor.

A fog gathers in night-time Manhattan, and an eerie light begins to shine. A nightless castle slowly becomes visible in the fog. The fog lifts to reveal the medeival "Rainbow Castle" which is shining brightly. King Luna and Queen Estrella appear on the balcony. They are not waering clothes from the Middle Ages, but modern attire. The stage changes to a dance party in which the castle residents participate.

Manhattan residents, including the mayor, sing and dance to welcome King Luna and his entourage. The mayor presents new clothes to the king and queen, and they put them on. A welcome dance begins.

The tramp Garo, who lives in a slum in Manhattan, receives an invitation to the castle. Garo is delighted and invites all his friends. They put on tuxedos which a butler prepared for them, clean themselves, and get in a car heading for the party.

Prince Planet and Princess Rainbow appear. He tells a story about the king and queen's love. It was 16 years ago. Princess Estrella and her friends met Prince Luna. He invited them to go dancing, but Estrella did not feel comfortable with Luna because she was not good at dancing. Afer everyone left, a clown appeared and gave a redp pair of shoes to Estrella. As soon as she put them on, she started dancing like crazy due to the magical power in the shoes. When she tried to jump into a fountain, Prince Luna stopped her and kissed her. Then the red shoes came off.

It is their majesties' wedding anniversary. The ministers discuss what acts King Luna and Queen Estrella should perform. With music, the king and queen start singing an opera. When it ends, Castle Thief Jacker Sanslot appears, causing chaos. When Sanslot gets caught, the big party starts again.

Sitting in their cell, Sanslot and his fellow men sing about their admiration for the castle. When Sanslot becomes frustrated and violent, Queen Estrella, the object of his affection, appears outside the cell. The queen and Sanslot fall in love. Is it real or is it just a dream? ... King Luna appears and sings of his love for the queen. The queen goes to him and Sanslot is left alone. The castle appears. The king and queen, again dressed in their medeival robes, are on the balcony.

On the morning the castle is to appear, Queen Estrella is embraced by King Luna on the balcony as if nothing had happened. When the fog gathers again and th castle disappears, Sanslot is left alone in Manhattan. The city is back to normal again.

Prince Planet appears and sings a song entitled "The City I Dreamed Of."

The fortune-teller Rockenfellow, dressed as a medeival character, performs a song and dance about Manhattan.

Mayor Lincane and his associates sing and dance.

A) Eo flies in the air and balloons fall.
B) King Luna and Quuen Estrella dance to passionate music.
C) Lincane, Rockenfellow and Prince Planet sing and join the king and queen.
D) The entire cast appears on stage and a night in Manhattan turns into an illusion.